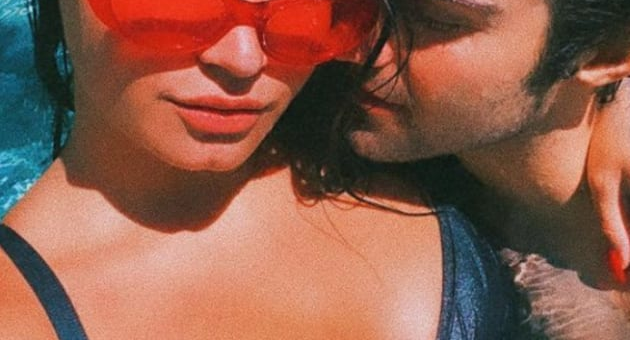 Demi Lovato has made tremendous strides in their personal life, coming out as nonbinary earlier this year and feeling more comfortable in their own skin.


That journey of self-discovery has had a few bumps along the way, including an abrupt and brief engagement.


But Demi isn’t looking at their 2020 relationship misstep as a blunder.


Instead, they say that ditching Max Ehrich was probably the best thing for them — and helped them to come to terms with who they are.


This weeks, Demi Lovato spoke to Kate Sosin of The 19th Represents Summit.


Their journey to coming out as nonbinary and moving to use they/them pronouns was a long one, and their breakup was certainly part of it.


Additionally, Demi affirmed, the COVID-19 pandemic “had everything to do with it.”


Already, during the first weeks of the global lockdown in March of 2020, Demi was already “starting to identify as nonbinary.”


“Then I met someone,” they recalled, referring to ex-fiance Max Ehrich but not by name.


“And,” Demi described, “I got into this straight relationship.”


“And that was great,” Demi generously stated.


“But,” they continued, “that led me to ignoring all the parts of myself.”


These were facets of Demi’s identity “that I didn’t think were digestible for my partner at the time.”


Demi confirmed that this was the partner “who ended up becoming my fiance.”


“In hindsight, the dissolvement of that relationship was actually probably the best thing that’s happened to me,” they expressed.


The split was so good for their development “because of what that led inside of myself.”


Demi explained how they were able to “stand on my own two feet” after the breakup.


It was empowering to do so “without needing someone else to validate me or to make me feel accepted,” they added.


Demi shared that they “really started to identify” as nonbinary after ending things with Max.


Towards the end of 2021, Demi began coming out to close friends.


The breakup was a key part of their journey to reach that point.


“It was the dissolvement of all things that had held me back from identifying as the person I do today,” Demi expressed.


Demi, like countless others, suspects that their exploration of their gender identity will likely continue “forever.”


“There might be a time where I identify as trans,” they said. “I don’t know what this looks like for me.”


Demi added: “There might be a time where I identify as nonbinary and gender-nonconforming my entire life.”


“Or maybe there’s a period of time when I get older that I identify as a woman,” Demi mused.


Like the rest of us, they don’t know what the future holds.


But Demi of course affirmed that “in this moment right now, this is how I identify.”


“And I have a feeling that it’s not going to ever go back to one way or the other…” Demi added.


“It’s about keeping it open and free,” they explained, “and I’m a very fluid person.”


It’s good to remember that nonbinary isn’t a third gender, it’s a vast category covering an array of genders and gender identities.


To anyone confused, it’s good to remember that trans men and trans women and often cis men and cis women tend to have a strong sense of gender identity.


This can be true for many people across the spectrum of gender, but others experience far less certainty about their own gender.


Demi falls in that category. It doesn’t make them any less valid than someone who isn’t quite sure of their favorite food or color. Nobody has to fit into a forever-box.

Preity Zinta shares gratitude for completing 23 years in the industry