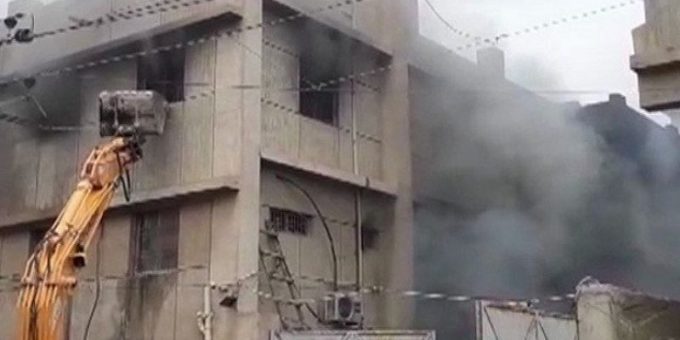 At least 17 labourers have lost their lives in a fire that broke out at a chemical factory in Karachi on Friday.

The blaze broke out at a factory in Mehran Town, Korangi.

According to Chief Fire Officer Mubeen Ahmed, the bodies of 16 labourers have been retrieved from inside the building and the area has been “cleared”, but fire fighters are sweeping the area once more for the satisfaction of the affected families who are in search of their loved ones.

“After the search operation is complete, we will begin to examine the events that occurred,” he said, adding that no cause had yet been determined for the fire.

Rescue officials said they had asked for heavy machinery to break the factory walls. It was earlier reported that they faced difficulties in the rescue operation due to smoke. Till 1:35pm, the police said more than 20 people were feared to be inside the factory.

According to eye witnesses, the fire brigade arrived late to douse the blaze. But Sindh government spokesperson Murtaza Wahab denied these reports, saying that the fire broke out at 10:09am and the fire brigade was alerted and left for the scene by 10:10am.

Jinnah hospital officials confirmed receiving 16 bodies, of which 12 have been identified and the the process to ascertain the identity of the remaining four is underway.

Two firefighters were injured while trying to put out the blaze.

Fire brigade officials said that a chemical used in the manufacture of various items was present in the factory and the fire broke out in the drum of the chemical and spread throughout the factory.

In an earlier update on the blaze, the chief fire officer said that 13 fire tenders and a snorkel were being used to put out the blaze.

He said a rescue vehicle and water board tanker were also present on the scene.

“There is only one way to enter the factory,” the chief fire officer said, explaining that the roof of the factory was also locked, making it difficult for the labourers to escape.

The fire has been brought under control and the cooling process is underway, he said.

Sindh Chief Minister Murad Ali Shah has taken notice of the fire at Karachi’s chemical factory and sought a report from the commissioner Karachi and labour department on how the fire broke out.

This was shared by Sindh government spokesperson Murtaza Wahab.

The Sindh CM has asked the concerned authorities to explain how the incident took place, what precautionary and safety arrangements were taken in the factory and how so many lives were lost.

The CM gave orders to extend full support to the bereaved families and said the injured should be given full treatment.