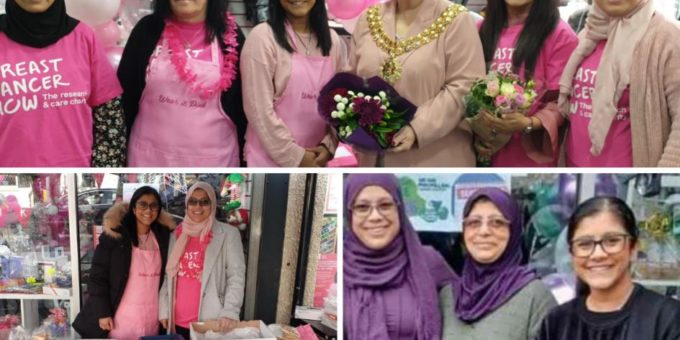 A daughter is aiming to raise awareness in honour of her mum who was diagnosed with breast cancer almost four years ago.

When Naz Vander’s mum Farida Patel was diagnosed with breast cancer in September 2018, she was heartbroken.

Thanks to spotting it early enough, Farida was able to successfully have an operation in November 2018.

Naz said: “It was quite a traumatic time.

“She was self-employed at Mums Mate (a baby shop in Halliwell), and the glue that holds everything together.

“She looked after all eight grandchildren and helped with the school runs.

“Last year I took her for her annual scan and biopsy, and she made a curry for the fundraiser the next day.

“She is so well known in the community, and she has helped so many people along the way.

“We just want to give back on her behalf and we try and do it annually.”

Naz particularly wants to fundraise to help spread awareness in the BAME community in Halliwell, Bolton.

She explained how there still continues to be a lot of stigma in the community, where some women think they can’t speak to a male doctor for example or that it’s an ‘intimate’ situation.

Naz added: “We wouldn’t have found the breast cancer if my mum didn’t have her mammogram because it’s so small.

“There are so many people that don’t go for routine scans in the ethnic community.”

Together with the charity Breast Cancer Now, Naz has helped develop a leaflet around breast cancer in several languages, including Persian, Arabic, Hindi, Gujrati, Urdu, Polish, and more.

She has previously helped raise money for Macmillan Cancer Support, and Breast Cancer ‘Wear it Pink’.

In October 2021 Naz helped raise more than £2,000 for Breast Cancer Now’s ‘Wear it Pink’ event, through a Just Giving page and a coffee morning.

And she didn’t stop there, in September 2021, she raised £727.70 during a Macmillan coffee morning and fundraising day.

Naz added: “It’s your health at the end of the day and it’s so important to just go for your appointment.

“I really want to help break the stigma in the Halliwell area, where there are people from all different Asian communities, where they speak different languages such as, Bengali, Gujarati, Punjabi, and more.

“Many people who may not speak English will come into her shop and ask her to translate medical letters, and she can speak many languages.

“When people come in and start talking to her, it’s a blessing really because she has gone through it.

“If it wasn’t for my mum, we wouldn’t be doing this.

“It’s sad we had to experience someone going through this to get involved and raise awareness.

“We want as many people as possible from ethnic minorities to attend.”

Cllr Rabiya Jiva said: “Once again I am really pleased and proud of the local community supporting and raising money for such an important cause.

“The event will be another amazing success, building on what the family do on a yearly basis.

“I can’t wait to be at the fun filled day.

“Breast cancer should be talked about and raising awareness is key.

“The staff are amazing, and support is there for you.

The fundraising event will take place on Sunday, August 14 at MA Mission Mosque and Community Centre on Halliwell Road in Bolton from 12pm to 6pm.

Bolton mayor Cllr Akhtar Zaman – who the family have known for more than 40 years – along with former mayoress Linda Thomas and Cllr Rabiya, are expected to attend the free of charge event.

There will be a number of sponsored stalls, where small businesses will pay a sponsor fee, where they can donate a percentage of profits if they choose to.

There will be a number of cakes and sweet treats, as well as a BBQ where all of the proceeds will go to Breast Cancer Now.

There is also a JustGiving page (www.justgiving.com/fundraising/AfternoonteaMAMission) that has been set up for those wishing to donate.

Did you know Meezaan Jaffery was the stand-in Khilji in Padmaavat?
2019-06-20