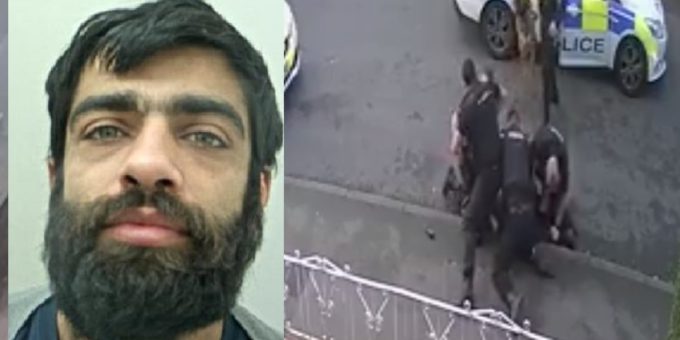 A CAR thief whose arrest sparked an independent police watchdog investigation has been jailed.

Footage of the arrest of Adeel Ashraf – in which several blows appear to be landed by officers when he was on the ground – sparked controversy when it was released on social media in January, with some claiming it was heavy-handed.

Burnley Crown Court heard the arrest of the 34-year-old, who was out on licence after serving half of a three-year drug supply sentence, followed a 10-minute pursuit through residential streets of Accrington during which he deliberately drove at at least one police car.

Ashraf, who had 10 previous driving while disqualified convictions before getting behind the wheel to notch up his 11th disqualification, reached speeds of 60mph in 20 zones during the police chase on January 8.

The car chase ended when the stolen Nissan Juke was driven over a stinger device and it ploughed into a lamppost. But Ashraf ran from the car and was arrested after the short foot chase.

Prosecutor David Clarke said the owner of the Juke, Sada Hussain, had left the vehicle locked outside her home in Burlington Street, Blackburn, at 8.15pm on July 7.

At 9am the following day members of her family found the kitchen window was open.

At 10.50am she checked an app on her phone, which showed transactions had been made on her bank card at 6.40am and 7.40am – times when Ms Hussain was in the house.

Ms Hussain then noticed her handbag was missing from the kitchen and there was a muddy footprint on the worktop, Mr Clarke said.

Her Nissan was no longer parked where she left it and her son’s laptop was missing.

Mr Clarke said that at 1.40pm police became aware of the location of the stolen Nissan when they narrowly avoided a head-on collision with it in Victoria Street, Accrington.

The court heard when the Nissan was driven onto Brown Street officers put their blue lights on but Ashraf drove at between 50mph and 60mph in the built-up residential street where there were cars parked on both sides of the road.

Mr Clarke said when the Nissan got to Charter Street the decision was made to deploy the stinger in a bid to deflate the car’s tyres and force Ashraf to stop.

However, one officer recalled how the Nissan crossed onto the wrong side of the road and drove straight towards his vehicle, causing damage to the front of his car before mounting the pavement and crashing into a lamppost.

Ashraf then got out of the Nissan and ran off but as shown in the video shared on social media he was surrounded in Lonsdale Street, Accrington, by five officers and a dog handler and subsequently detained.

The court heard Ashraf, of Belfield Road, Accrington, was taken to Royal Blackburn Hospital after his arrest, complaining of stomach pain.

Mr Clarke estimated the pursuit lasted up to 10 minutes and covered a distance of around one mile.

The court heard that Ms Hussain had bought the car only months earlier for £10,660 but because her insurance company had reimbursed her £8,410, she had been left £2,250 out of pocket.

In her victim statement, Ms Hussain said she had spent a four-figure sum on CCTV and security gates as a result of the break-in.

Defending, Duncan Nightingale accepted his client had an appalling record and deserved jail.

He said: “My best point in mitigation is the fact the defendant did plead guilty at a very early stage.”

Jailing Ashraf for 16 months, Recorder Andrew Nuttall said he would have sent the defendant to custody for longer but his powers had been “hamstrung” by sentencing guidelines.

He said: “The driving was, quite frankly, appalling. It was dangerous. Police officers put their lives at risk to protect the public and apprehend someone like you.

“You have an appalling record for many offences, starting in 2002, and a large number of those are to do with cars.

“It is clear you are an absolute menace on the road. If I could have imposed a longer sentence than I am going to then I would have done. I am confined by the law on this matter. I am constrained that I can not impose a consecutive sentence to the one you are currently serving.”

Ashraf was disqualified from driving for four years and eight months.

No order for compensation was made.

Following Ashraf’s arrest Lancashire Police issued a statement confirming the incident was being reviewed by their own professional standards department. The force also voluntarily referred itself to the Independent Office for Police Conduct.

Man Arrested After Police Respond To Active Shooter At Boulder Grocery Store In Colorado, US
2021-03-22