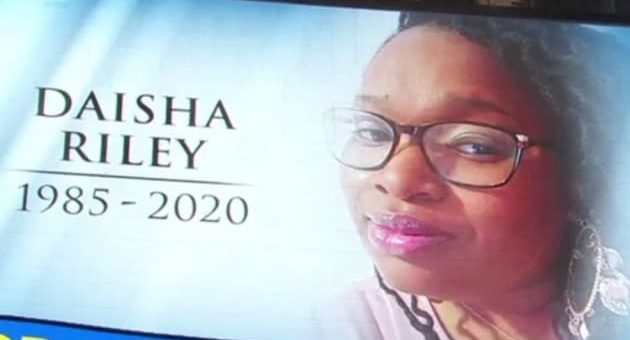 
“This is a tough morning for us here at ‘GMA,'” co-host Michael Strahan began on Tuesday in breaking this awful piece of news.


“One of our stars, Daisha Riley, a young and talented producer, suddenly and unexpectedly passed away.


“She rose through the ranks over the years on our show, working on stories that have made so many of you, our viewers, smile and tear up.


“Her legacy lives on in a powerful voice she shared through storytelling.”


Strahan went on to honor his late co-worker as a series of shots were shown of Riley smiling and laughing with colleagues, friends and loved ones


“You might not have known Daisha Riley’s name, but if you watched ‘GMA’ for the past 14 years, trust us, you saw her incredible work,” Strahan said.


“Because Daisha loved nothing more than telling America a story. Daisha Riley could write a breaking news piece with lightening speed.


“On features, she could make you cry with her exquisite choice of words.”


Strahan even added that Riley once successfully secured an Iron Throne for when the morning news show was interviewing the cast of HBO’s Game of Thrones, noting that the show’s actors themselves were quite impressed by the feat.


“She was never the loudest voice in the room, but she was always the smartest,” Strahan went on.


“Funny and brilliant and above all, kind, quick with a smile and a kitten meme, just when you needed it most.


“You might not have known Daisha Riley’s name before today, but now you do: a world class producer, a pillar of ‘GMA’ and a friend to us all.”


From there, the program aired footage of photos of Riley, while Strahan spoke directly to the camera again, saying she was “beloved by all of us here.


‘Her smile lit up a room,” and he said that she “won multiple Emmys for her incredible work.”


“It’s just hard for us and difficult to even wrap our heads around this,” Strahan concluded. “But we can’t express how much we’re going to miss her.”


“Daisha Riley was a remarkable woman….talented, creative, kind, a beautiful soul in every way,” she wrote. “Condolences to her beloved family.”


“Our @GMA family loved her and will be forever grateful to have experienced Daisha’s grace & grit,” Roberts added.


May Daisha Riley rest in peace.