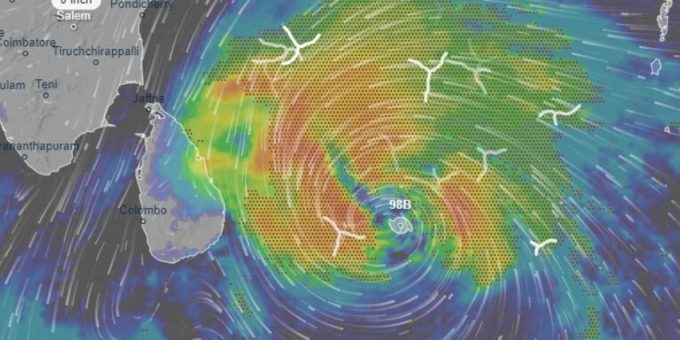 Colombo (News 1st); The Indian Meteorological Department (IMD) has warned that the depression in the Bay of Bengal is likely to turn into Cyclone Burevi.

According to the latest update of the IMD, the depression is ‘very likely’ to move west-northwestwards and cross Sri Lanka coast ‘between latitude 7.50N and 9.00N close to Trincomalee’ during evening/ night of December 2nd.

In less than a week after Cyclone Nivar swept past Tamil Nadu and Andhra Pradesh, another cyclone started to brew over the Bay of Bengal.

The low-pressure area lingering over the Bay intensified into a depression during the early hours of Monday.

As per the India Meteorological Department (IMD) forecast, the system is likely to intensify into a cyclonic storm.

Once the system intensifies into a cyclone, it will be named ‘Burevi’ as per the naming guidelines set by the World Meteorological Organisation (WMO). Unlike Nivar, Burevi may not turn into a very severe cyclone as the Bay of Bengal lacks the energy to feed the system further.

However, the system is likely to reach a maximum intensity of 60-70 kmph gusting to 80 kmph, and bring very heavy rains across southern Tamil Nadu and Sri Lanka.

Burevi will be the fifth cyclone over the North Indian Ocean this year, after Amphan, Nisarga, Gati, and Nivar. It is expected to be the least destructive of all if the projections hold true.

The system will progress west-northwestward toward Sri Lanka and across the island country’s coast by Wednesday night.

It will travel over enough warm water to become a cyclone and start to influence the Tamil Nadu coast from Wednesday onwards bringing isolated heavy rain and thunderstorms.

Under the influence of the potential cyclone, widespread rainfall is forecast across Sri Lanka between Tuesday and Friday with a likelihood of isolated extremely heavy rainfall on Wednesday and Thursday.

Do you know about these 7 dishes from the Konkan belt?