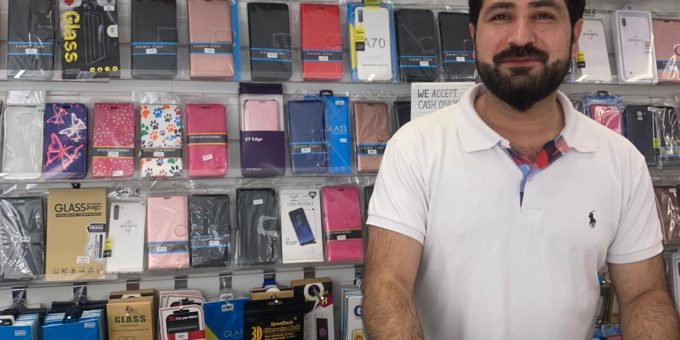 A PHONE shop owner was hailed a community hero after stepping in to help a woman robbed in his shop.

Customers of the Mobile+ Care shop stepped in to refund Bahadar Khan so he would not be out of pocket after hearing he had agreed to give Valerie Glazzard a phone she was buying when a thief stole her money.

Local man Richard Simmonds crowdfunded the £110 cost of the phone within 24 hours in a bid to reply Mr Khan for his kind actions.

We previously reported how Mrs Glazzard, 74, had just placed £110 on the counter inside the Church Street shop to pay for a second hand phone when she was shoved aside and the money was snatched by a thief who rushed inside the store.

Despite the theft, Mr Khan handed over the phone saying it was rightfully hers.

Mr Khan, aged 42, said he felt very humbled when we contacted him to tell him about the fundraiser.

He said: “I did not expect anything like this.

“I helped the lady because it was the right thing to do.

“It is how my family raised me. In my culture we respect our elders and we care for our youngers.

“Malvern is a brilliant town, with a fantastic community. I was just doing what anyone else would have done.

“To build a great society we must all play our part.

“I didn’t expect this attention, but it feels so good as a small business to feel so supported by our wonderful community.”

Mr Simmonds said: “I set the page up as it’s simply not right for someone to be out of pocket after such a kind act.

“He did not need to do what he did but it’s clear he felt responsibility as it was in his shop.

“I am delighted to have hit the target thanks to the generosity of some local Malvern people and will be handing the money over to Mr Khan this week.”

Mr Khan, a father-of-three, commutes from Birmingham every day to run the shop with his older brother.

He said they have been struggling recently due to the pandemic, adding the fact the community is behind them “means the world.”

Mrs Glazzard praised Mr Khan’s actions and said: “With racism at the forefront of the news it was an example where an Asian man triumphed in spirit.”

The money was raised via GoFundMe.