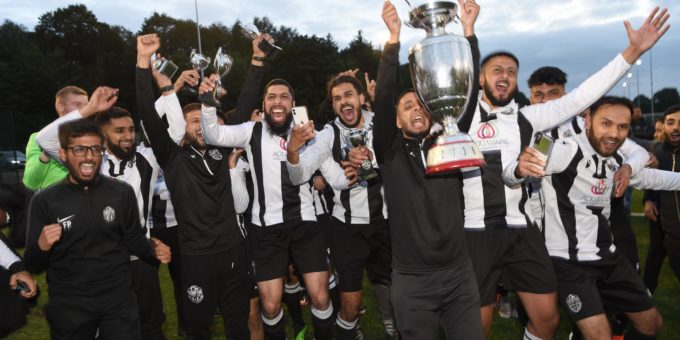 For the neutral it was a fitting end to four weeks of football and our annual Asian Image Cup tournament. Games were played at Witton Park 3G Pitches in Blackburn.

Following on from another disrupted season due to Covid, players and fans were almost relieved to be able to play football again and participate in the annual football festival.

Barring the final 30 minutes of this match (Sunday August 8) Bradford’s Route One Rovers had quite comfortably been the team of the tournament. They had brushed aside four-time winners Coppice United and 2019 finalists Euro Garages in previous rounds. And they were a pleasure to watch.

Crompton, meanwhile, had begun well and beaten Paak United and then laboured through a semi-final against Blackburn United – scoring an extra-time winner to reach their first ever final.

Route One were the favourites and they began as they did in their previous two games, bossing the midfield and almost toying with the opposition.

They went ahead through Younis and then the second personified their play. A delicate ball over the Crompton defence found Awais Khan whose nonchalant lob into the goal drew applause from the crowds.

Crompton for all their efforts were chasing shadows in the first half and 60 minutes were lucky to be just two goals down. They looked a little nervous and almost seemed overawed by the occasion.

But there was something about this Crompton team. That fighting, never-say-die attitude was about to turn this game on its head.

They got themselves back into the game through a wonderful free-kick from O’Brien. The Route One defence were getting a little ragged and there were two further chances for the Bolton side.

Route One did have opportunities to make it three but you could sense something special was going to happen at the other end. Crompton were back in it through a penalty, and they were, somehow, all square.

Worse was to come for Route One who found themselves down to ten men for a second bookable offence. As the watching crowds prepared themselves for extra-time there was a one last opportunity for someone to make themselves a hero and it came in the form of substitute Ayoub Alouchi.

His darting run on the right saw him ghost past two players and plant the ball into the bottom corner. Nobody would for once blame the fans who rushed on to the pitch to join in the celebrations.  To say that one did not see this coming would be an understatement. It was one of the greatest comebacks this tournament has seen, most certainly in a final.

Whilst Route One will rue the missed opportunity of not having put this game to bed earlier on, credit must go to the Crompton side for not giving up, even when all looked dead and buried.

A special mention also for how both sides and their staff conducted themselves throughout their games.