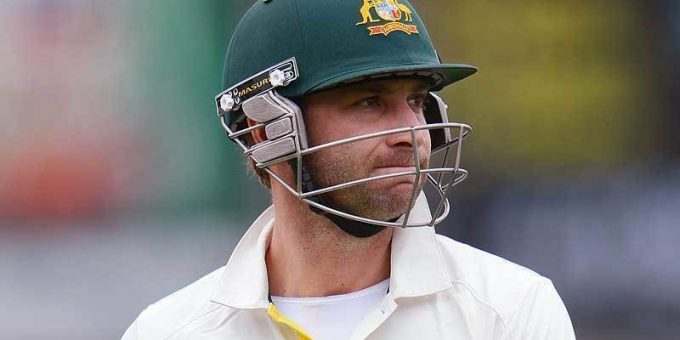 Australia’s cricketers have paid moving tribute to Phillip Hughes on the fifth anniversary of his death, gathering on the Adelaide Oval pitch to remember him after his death in a freak on-field accident.

Hughes, who played 26 Tests, died from bleeding on the brain on November 27, 2014, after being hit on the neck by a rising ball while batting in a domestic match at the Sydney Cricket Ground.

His death stunned Australia and the world cricket community, sparking an outpouring of grief and ushering in stronger protocols around concussion and better player safety equipment.

David Warner and Nathan Lyon, part of the team that will play Pakistan in the second Test starting Friday, were on the field when Hughes collapsed, while Steve Smith was also a teammate and friend of the 25-year-old.

Australian captain Tim Paine said coach Justin Langer gathered the team in a circle on the pitch late Wednesday, the anniversary of Hughes’s death, to remember their colleague.

“Last night actually it was quite a nice moment. JL had us in the middle of the ground, in a bit of a circle and we just had one of those moments,” he said on Thursday. “He’s big on guys talking about things that help them deal with it. Obviously for a few guys, it was a difficult day. We just got in a circle and guys who had spent a lot of time with him told stories abut Hughesy and the times they spent with him. It was just trying to remember him in a positive way and remind ourselves how lucky we are to be playing the game that he loved and we love and how much playing for his country meant to Hughesy and for us to never take that for granted.”

“A man dedicated to his family, a loyal friend, a popular teammate and a prodigiously talented cricketer,” Roberts said. “There hasn’t been a single day over these last five years when Phillip’s loss hasn’t been felt acutely by the Australian cricket family.”

Former Australian skipper Michael Clarke, who was a pallbearer at Hughes’ funeral and delivered a tearful eulogy to his “little brother”, also paid tribute.

“Everyday I think of you, but this week even more. Wish you were here buddy,” he said on Instagram.