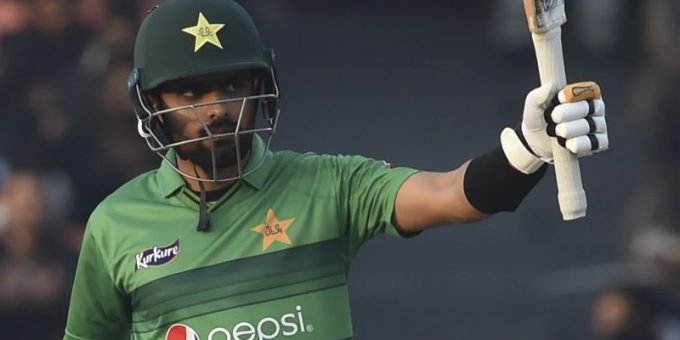 Pakistan’s cricket fraternity has paid tribute to star batsman Babar Azam after he was officially announced as the best batsman in the world in the 50-over format.

The right-hander achieved the feat after scoring 228 runs in the recently three-match ODI series against South Africa which helped him overtake India’s captain Virat Kohli in the ICC Rankings.

Following the announcement on Wednesday, former and current cricketers have paid homage to Babar for becoming only the fourth batsman from Pakistan to hold the top spot in the ICC ODI Rankings.

Many congrats to you @babarazam258!
Becoming number one of the world is certainly an amazing achievement. Many more to come insha’Allah🙌🏽🙌🏽

Congratulations @babarazam258 on being number one batsman in ICC Odi ranking..we all proud of you

Richly deserved @babarazam258 . Hard work, perseverance and discipline are key to a successful career. Keep it up – we are proud of you . https://t.co/QO4OoeI8sL

MashAllah MashAllah kya baat hai @babarazam258 👏 Many congratulations on becoming the world No.1 ranked ODI batsman. Babar’s lift in ranking is a lift for the whole country. InshAllah many more milestones await you in future Boss. #PakistanZindabad 🇵🇰 pic.twitter.com/eRyyW24RF8

Congratulations bro @babarazam258 on becoming no1 batsman in the world 🇵🇰🇵🇰🇵🇰🇵🇰👏👏👏👏👏🎊🎊🎉🎉🎉🎂🎂🎂🇵🇰🇵🇰🇵🇰🇵🇰🇵🇰🇵🇰🇵🇰

In the updated ICC Rankings for batsmen in ODIs, Pakistan captain tops the chart with 865 points followed by Kohli, who has 857 points.

Rajasthan Announces 6 pm To 6 am Curfew In All Cities