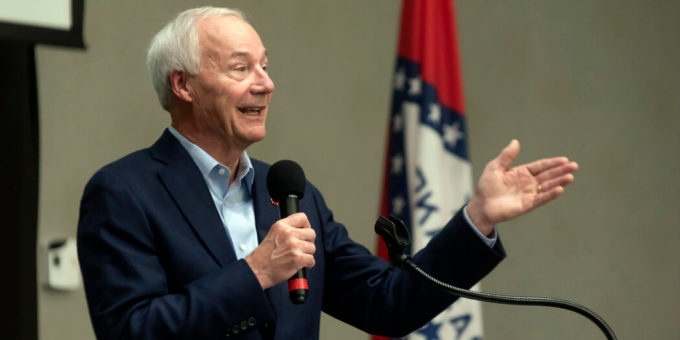 Arkansas on Monday joined Colorado, California and New Mexico in broadening access to Covid-19 boosters, getting ahead of federal regulators who are close to making a decision on expanded eligibility.

Gov. Asa Hutchinson said at a news conference on Monday that he had directed the Arkansas health department to issue new guidelines on boosters to allow all adults to get one, provided that they met the timing rules.

State leaders have found themselves in a conundrum since August, when regulators halted President Biden’s plan to make boosters available to all adults. The leaders have had to decide: Do they wait for a federal directive, or do they make their own vaccination rules?

The decisions they make are more timely than ever, as the United States braces for a possible winter surge. As of Monday night, reported new cases in the United States had averaged nearly 85,000 a day for the past week, a 14 percent increase from two weeks ago, according to a New York Times database. Reported new deaths are down 14 percent, to 1,129 a day; hospitalizations have decreased 7 percent and are averaging more than 46,000 a day.

And in Europe, whose Covid trends are often a harbinger of those in the United States, a fourth case wave has been driven by the unvaccinated.

Four states, including Arkansas, aren’t waiting for a federal decision on boosters, and on Monday New York City became one of the first major cities to tell all adults to get a booster if they wanted one.

In Arkansas, a spokeswoman for the state’s health department said it had updated its recommendations and would be advising health care providers that they could administer the boosters to an expanded pool of adults.

“What we’re finding is that we want more people to get their booster shot and that this is somewhat confusing and limiting as to the eligibility,” Mr. Hutchinson said, adding, “We’re changing that.”

However, a spokeswoman for the governor’s office said that Mr. Hutchinson had no plans to issue an executive order to expand booster eligibility.

According to the health department guidelines, Arkansas adults are now eligible for the vaccine booster if it has been at least six months since their second shot of the Pfizer or Moderna vaccine, or at least two since they received the single-dose Johnson & Johnson vaccine.

A growing body of early global research has shown that the vaccines remain highly protective against hospitalization and death, but that their effectiveness against infection wanes over time. Public health experts say this does not mean the vaccines are not working.

Last week, Pfizer and BioNTech requested that the Food and Drug Administration expand eligibility of their booster to all adults, a request that the agency is expected to grant before the winter holiday season.

Before a formal recommendation from the federal authorities, several other states have expanded booster eligibility.

The governors of Colorado and New Mexico signed executive orders last week expanding eligibility to all adults, and in California the state’s public health director issued a letter last week saying anyone 18 or over was eligible. The authorities in New York and West Virginia on Monday encouraged all adults to get the booster but stopped short of a formal policy change.

More than 10,000 Australians have registered for compensation claims linked to complications from coronavirus vaccinations, a situation that could leave the government paying out tens of millions of dollars in public money for rare occurrences of serious problems.

A government program will offer no-fault payouts for factors including extended periods of missed work, and the minimum amount for such claims is 5,000 Australian dollars ($3,670). Applicants will be expected to provide medical bills and other evidence, and the registration surge has already occurred a month before an online portal launches.

In a country where nearly 85 percent of residents over 16 have been fully vaccinated against the virus, the Australia’s main medical regulator has recorded 78,880 adverse events said to be linked to Covid vaccination. That amounts to just 0.21 percent of the nearly 38 million doses given to over 18 million people in the country by early November.

Most of those adverse events involved mild side effects like headache, nausea and sore arms. The regulator, the Therapeutic Goods Administration, has received 288 reports of heart inflammation among people who received the Pfizer-BioNTech vaccine, as well as 160 reported instances of a rare clotting complication linked to the AstraZeneca vaccine.

The regulator noted in a report last week that new illnesses or deaths within a few days or weeks of inoculation were “often coincidental, rather than being caused by the vaccine.” Nine deaths have been linked to Australia’s inoculation program, nearly all of them among people age 65 or older.

It is unclear how a few hundred recorded cases of adverse effects have led to 10,000 registrations of interest in the compensation program. For the most part, Australia’s vaccination program has been a slow and then rapid success: After initial setbacks, an outbreak of the Delta variant pushed the country to move quickly to vaccinate its population.

The country’s two largest cities, Sydney and Melbourne, recently emerged from lengthy lockdowns, and case numbers have been declining nationwide to fewer than 1,500 per day.

Hong Kong has granted Jamie Dimon, the chief executive of JPMorgan Chase, an exemption from one of the toughest pandemic quarantines in the world.

Mr. Dimon this week became the first head of a Wall Street bank to visit the city since the beginning of the pandemic. He was in town on Monday and Tuesday to meet with employees and regulators.

Even as other places loosen travel restrictions, Hong Kong has stuck with its lengthy quarantine mandates for most visitors, leaving little room for exceptions. The last public figure to be granted an exemption in Hong Kong was Nicole Kidman, whose visit to film a television series about rich expatriates prompted outcries, including debate in Hong Kong’s Legislature.

Mr. Dimon’s exemption was “justified to facilitate a short visit” of about 30 hours, a government spokesman said in an emailed statement, adding that Mr. Dimon’s trip was “considered to be in the interest of Hong Kong’s economic development.”

Earlier this year, officials carved out exemptions for top bankers and other executives whose work they said was in Hong Kong’s economic interest. Those exemptions were mostly abandoned last month when Hong Kong’s top leader said the government needed to align itself with mainland China’s goal of complete elimination of the virus.

During his visit, Mr. Dimon said that Hong Kong’s quarantine rules were making it difficult to retain employees in the city, according to Bloomberg News.

His brief comments echoed those from the Asia Securities Industry and Financial Market, a top lobbying group for financial firms, which publicly urged Hong Kong to loosen rules and warned that the restrictions were threatening the city’s status as an international business hub.

At one point, fall was billed across corporate America as the Great Office Reopening. But the Delta variant of the coronavirus intervened, and mandatory return-to-office plans turned optional.

Still, many people chose to report back to their desks. The share of employed people who worked remotely at some point during the month because of Covid-19 dropped in October to 11 percent, the lowest point since the pandemic began, according to the Bureau of Labor Statistics.

A closer look at the New York work force, from a November survey of 188 major employers, showed that 8 percent of Manhattan office workers are back in the office full time, 54 percent are fully remote and everyone else — nearly 40 percent — is hybrid.

Few are finding it a smooth transition period. Some companies used their tentative return-to-office dates as a way to avoid questions about how to balance the needs of their remote and in-person employees, according to Edward Sullivan, an executive coach.

That has resulted in a mushy middle ground: video calls where remote workers have trouble hearing, a sense that people at home are missing out on perks (teammates), while those in the office are, too (pajamas).

At stake isn’t just who is getting talked over in meetings. It’s also about whether flexibility is sustainable, even with all the benefits it confers.

A local government in eastern China said it had reassigned decontamination workers and called on them to apologize after they entered a quarantined resident’s apartment and beat a pet corgi with a metal rod, triggering anger online.

Video of the incident, from a home security camera, circulated widely on Chinese social media on Saturday. It showed two workers in white hazmat suits pursuing the dog in an unoccupied apartment. It yelps as one worker swings at it with a metal bar. Then it is briefly caught in the legs of a table as it flees to another room off camera.

The dog’s death was not shown, but state media reports later said it had been culled. The vague wording of the Xinzhou district government’s statement Saturday, which said workers had “decontaminated” the animal though there was no indication it had been infected with the coronavirus, helped fuel the outcry.

The pet’s owner or owners could not be reached for comment. According to an account on the Twitter-like platform Weibo that first shared the video, the owners had been sent to hotel quarantine along with other residents of their neighborhood in the city of Shangrao, in Jiangxi Province. Jiangxi is experiencing a small-scale coronavirus outbreak, with more than 70 cases reported since the end of last month.

Quarantined residents were asked to leave their apartments so local government workers could disinfect them. But unlike in other Chinese cities, which allowed owners to take pets into quarantine or even arranged boarding, no preparations for animals appear to have been made.

It was unclear why the dog was killed. In other parts of China, a small number of animals have been killed as part of the pandemic response, including three cats that were euthanized in the northern city of Harbin in September after they were found to be infected with the coronavirus. Before the pandemic, some Chinese cities carried out large-scale campaigns to cull unregistered dogs and cats.

The online anger over the corgi’s treatment touched on broader concerns about draconian enforcement of China’s “zero Covid” policy, which has led to repeated lockdowns in some cities, and about the abuse of animals. China has no law against animal cruelty, despite the growing popularity of pet ownership.

“This kind of behavior is really chilling,” Zhang Junyang, a film director, wrote on Weibo.

“In the current epidemic situation, the grass roots personnel are indeed working very hard,” he added. “But why can’t we have a little warmth when dealing with domestic pets? Why can’t it be more humane?”

State media outlets sought to assuage anger over the episode, calling it an isolated mistake that should not reflect poorly on the national pandemic response.

“Observers admit the imperfect behavior of the anti-epidemic staffer, but they have also called for more understanding toward the front-line workers who are working tirelessly to curb the epidemic,” read one report in the Global Times newspaper, which is owned by the ruling Communist Party.