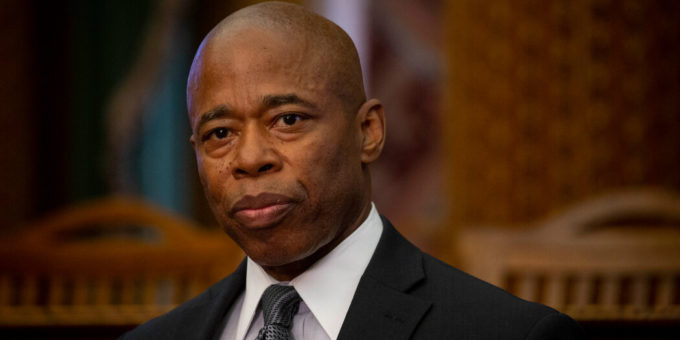 Following weeks of silence, Mayor-elect Eric Adams vowed on Thursday to keep New York City’s vaccine mandate for private-sector employees in place. The requirement, which was enacted by Mayor Bill de Blasio and is the first of its kind in the nation, went into effect on Monday, during Mr. de Blasio’s last week in office.

“The private sector employer mandate will stay in effect in the New Year, with a focus on compliance, not punishment,” Dr. Chokshi announced.

Epidemiologists applauded the mandate, but its timing at the tail end of Mr. de Blasio’s tenure sowed confusion among some business owners, who were unsure whether to abide by the mandate, or to just wait until Mr. Adams took office and announced his own policy. Some also see it as a bureaucratic headache and worry that some workers might quit rather than comply.

Mr. Adams’s silence on the matter had also fostered hope among some business owners that he planned to allow the mandate to lapse.

But in the weeks since Mr. de Blasio announced the policy on Dec. 6, the Omicron variant has rampaged through New York City and driven a sharp increase in coronavirus cases.

On Wednesday, the city set a one-day case record for the third time in a week, and a subway line connecting Queens and Manhattan shut down, because so many transit workers had called in sick. Life in the city, in some ways, has slowed to a crawl. The Westminster Kennel Club postponed its January dog show, in deference to Omicron.

Omicron has already infected hundreds of thousands of city residents. On Wednesday, Gov. Kathy Hochul announced that in New York City 39,591 people had tested positive the previous day. And that is an undercount as it doesn’t include many at home tests that came up positive but were never reported to the public health authorities.

Across the city, the test positivity rate is above 20 percent. Hospitals across the city are seeing hundreds of new Covid-19 patients a day, though many are far less sick than patients from previous coronavirus waves, doctors and hospital systems say. As of Tuesday, the most recent day of reporting, there were just under 3,200 Covid-19 patients in New York City hospitals. About 370 were in intensive care units.

Dr. Ashish K. Jha, the dean of the Brown University School of Public Health, said Mr. Adams’s decision was a wise one.

“Vaccines remain the way we get out of this pandemic,” Dr. Jha said. “And asking employers, private and public, to make sure their employees are vaccinated — which creates a much safer working environment — I think it’s essential.”

Dr. Jha’s enthusiasm was not universal.

Mr. de Blasio’s mandate, which is now Mr. Adams’s, has angered some in the business sector, including big corporations, which chafe at the prospect of having to abide by both President Biden’s mandate, which is in Supreme Court limbo and contains a testing loophole for the unvaccinated, and New York City’s, which does not.

“For large businesses with a global and national footprint, consistency between federal policies and state and local policies on vaccine and mask mandates and Covid protocols generally is really important,” said Kathryn Wylde, chief executive of the Partnership for New York City, which represents many large corporations.

Deepika Padukone makes yellow a winter colour and we are not complaining; see pics
2020-01-13