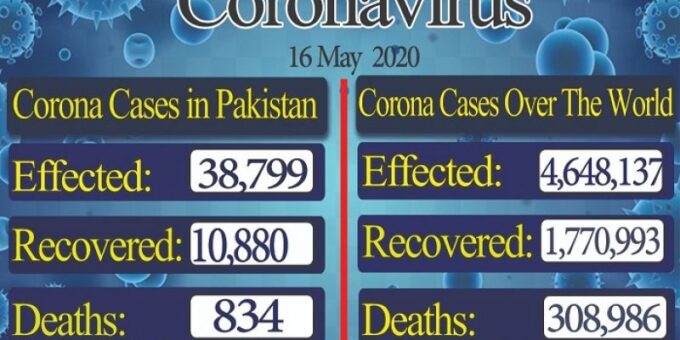 The number of confirmed COVID-19 cases in Pakistan rose to 38,799 on Saturday after new infections were confirmed in the country.

The province-wise break up of the total number of cases as follows:

Officials have recorded more than 4.43 million cases and more than 301,000 deaths since the virus emerged in China in December.

40-49 age bracket most affected by coronavirus in Sindh

According to statistics revealed by the Sindh health department, more than 1,800 persons belonging to the age bracket 40-49 years have contracted the coronavirus in the province.

The statistics further revealed that 466 persons aged above 70 years old have contracted the virus while more than 688 children in the age group of 1-9 years have been affected by the virus throughout the province.

International flight suspension extended to May 31

The Civil Aviation Authority tweeted that the suspension of international flight operations, according to the directions of the government, has been extended to May 31.

The Punjab government has allowed large shopping malls across the province to reopen from Monday.

The provincial government has allowed malls across the province to reopen provided coronavirus safety precautions in the form of a set of SOPs will be followed.

A meeting has been called by the Punjab chief minister to determine the SOPs according to which the malls will be reopened.

Cricket behind closed doors not a problem for England’s Anderson