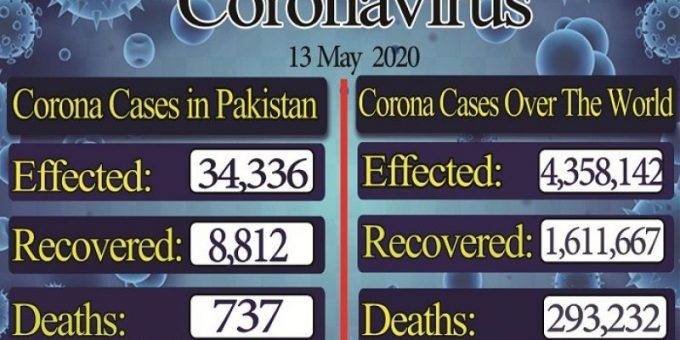 The number of confirmed COVID-19 cases in Pakistan rose to 34,336 on Tuesday after new infections were confirmed in the country.

The province-wise break up of the total number of cases are as follows:

Former prime minister and Pakistan Muslim League-Nawaz (PML-N) leader Shahid Khaqan Abbasi hit out at the government and its “smart lockdown”, saying the Centre had no concrete plan to deal with the coronavirus pandemic.

“The prime minister had said he would not impose a lockdown in the country because the poor and daily wagers would suffer as a result of it. He then said that the lockdown had been enforced by the elite. Who are these elite,” Abbasi asked, addressing the floor of the House on Wednesday.

“The day the prime minister said he would not enforce a lockdown, there was a curfew in front of his own house,” he said.

Abbasi continued, “Then a new word ‘smart lockdown was introduced. Where is the federal government’s decision about the lockdown? It was the provinces’ decision to enforce lockdowns.”

Coronavirus Economic Package – Only Indian Companies To Be Allowed In Tenders Up To Rs 200 Crore: Centre