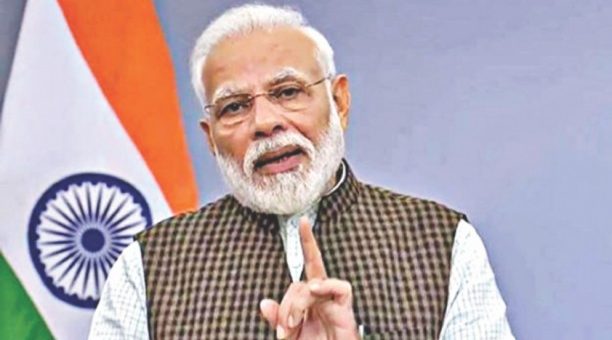 Indian Prime Minister Narendra Modi has announced a complete economic package of Rs 20 lakh crore, which is nearly 10 percent of the country’s GDP, to deal with the economic fallout from the coronavirus pandemic and help the country achieve self-reliance.

Modi also announced that the ongoing lockdown would be extended in a “completely different form and with new guidelines” after the ongoing curbs end on May 18, our New Delhi correspondent reports.

In a televised address to the nation on Tuesday night, Modi said the emphasis of the economic package would be on four “L”s — land, labour, liquidity and law — which will “give a new momentum to the efforts to make India a self-reliant nation”.

The details of the complete economic package, which will cover the cottage, micro, small and medium industries, the middle class and industrialists, will be made public by the finance minister from tomorrow, the Indian premier said.

Modi first imposed the lockdown on March 25, extending it twice since, to check the spread of Covid-19 which has so far claimed more than 2,000 lives and affected over 72,000 people across India.

During his half-an-hour speech, Modi repeatedly stressed on making India self-reliant saying the structure of achieving this stands on five pillars — economy that does not bring incremental change but quantum jump, modern infrastructure, system that is in tune with 21st century, demography and demand.

Mentioning that India can greatly contribute to the welfare of humanity with the resolve of 130 crore Indians to make India self-reliant, Modi said, “We have the resources, the capability, and world’s best talents. We will make best products, improve our supply chain and make it modern. We can do it and we will do it.”

​He pointed out that when the coronavirus crisis began in March, India was not producing PPE kits and N-95 mask production was very low. Today, the country is producing 2 lakh PPE kits and an equal number of N-95 masks daily.

“The crisis has shown the importance of self-dependent India. This is the only way,” Modi said.