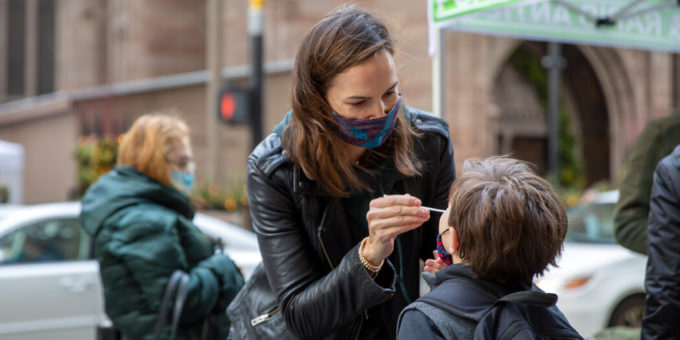 The dread was familiar.

As news spread of the latest coronavirus surge, fueled by the Omicron variant, parents faced a return to the drudgery of school through a screen, child care crises and restless young bodies, penned inside for the winter.

In Manhattan, Olivia Strong received an email from her son’s public middle school on Monday, informing her that his cohort of eighth graders would transition to remote learning because of multiple positive virus cases.

“I was not even slightly surprised; I fully expected it,” she said, sighing deeply. Her hope, she added, was that a short break to reset would allow schools to reopen more safely in the new year.

Districts have mostly reassured families that despite targeted classroom closures to contain spread of the virus, they plan to continue in-person learning until the Christmas break and reopen as planned in January. New York City, Boston and Montgomery County, Md., in suburban Washington, were among the large school systems that said they would not shift districtwide to remote learning, or would do so only if forced to by public health officials.

Still, the alarming spread of the virus could expose the rickety infrastructure that has kept schools running through most of this year. Many schools are still in need of substitute teachers and bus drivers, and can ill afford an outbreak that would send even more staff members home. There still are not enough rapid tests to quickly screen whole classrooms or schools. And some districts may have a tough time meeting demand for online learning as children are quarantined or concerned parents choose to keep them home.

“This is going to be a winter of challenging choices for schools, but closure cannot be the default,” said Robin Lake, director of the Center on Reinventing Public Education, a think tank that has studied district responses to Covid-19.

Despite targeted classroom closures to contain spread of the virus, things have gone relatively smoothly for schools. Across the nation’s 13,000 districts and 98,000 public schools this week, there are about 600 shuttered schools or districts, according to data from Burbio, a company that has tracked how schools have operated through the pandemic. There are fewer closures now than in November.

And school outbreaks remain limited, as they have been throughout the pandemic.

New York City, the nation’s largest district and the one currently most threatened by the Omicron variant, has 1,600 schools; seven are currently closed because of virus cases, with 45 under investigation.

In a Friday radio interview, Mayor Bill de Blasio noted that the coronavirus test positivity rate in the city’s schools was 1 percent while the citywide community positivity rate was over 5 percent.

The picture had been bright enough that many schools relaxed virus restrictions in recent weeks.

Several school districts in Florida dropped their mask mandates. New Jersey relaxed school quarantine rules, decoupling them from community transmission rates and reducing the number of stay-at-home days for students who had close contact with an infected person.

And in Missouri, the attorney general, a Republican, sent a letter to districts directing them to drop mask mandates and quarantine requirements after a circuit court judge ruled that such measures violated the State Constitution. Several districts are resisting, a sign perhaps that there may be political dissension after the holidays, when schools weigh whether to reopen classrooms after family gatherings that will almost certainly make the current surge more severe.

Washington, D.C., has already extended its vacation by two days, directing families to pick up rapid tests at schools and test students before returning them to the classroom.

But Prince George’s is an outlier; the political will to keep schools open is notable given that many of the states experiencing the heaviest virus case loads are in the Northeast and Midwest, which have powerful teachers’ unions. They spent much of the pandemic fighting for strict mitigation measures and longer periods of remote learning.

This time, union leaders in New York, Boston and Philadelphia said they were not asking for districtwide remote learning, and were instead focused on pushing administrators to enforce virus mitigation measures.

But in an interview on Friday, the vice president of the Chicago Teachers Union, Stacy Davis Gates, did not rule out pushing for a period of remote learning after the holidays.

She argued that the district’s contact tracing efforts had been sluggish and that the city should make greater efforts to vaccinate students and parents on school grounds and provide families with free, at-home rapid tests.

Several schools, she said, already had to contend with large numbers of absent staff members because of the virus. “At what number do you say it’s unsafe for people to be in the building without X number of adults?” she asked.

Chicago Public Schools said in a written statement that after the holiday break, which began on Friday, it would restart a free, weekly P.C.R. testing program at schools and would “push to urge families to consent to testing.”

The federal Centers for Disease Control and Prevention encouraged schools on Friday to reduce quarantines and closures by using a protocol known as test-to-stay, in which close contacts are given frequent rapid tests; only those who test positive must stay home.

Many districts do not have a sufficient supply of such tests, however, nor the staffing to widely administer them. Chicago has piloted test-to-stay in a single elementary school. Boston Public Schools said last week it had hired an outside staffing agency to help fill open nursing positions.

Another challenge is that many parents have not given consent for their children to be tested for the virus at school. Some teachers’ unions have urged districts to shift from a protocol of parental opt-in to one of parental opt-out.

“If there is a positive case in a class, everyone should just get tested,” Erik Berg, vice president of the Boston Teachers Union, said. “If our universities and colleges can test everyone on campus twice per week, it says a lot about the commitment to K-12 education that we can’t even test people we know were in the same room with a positive case for six or seven hours.”