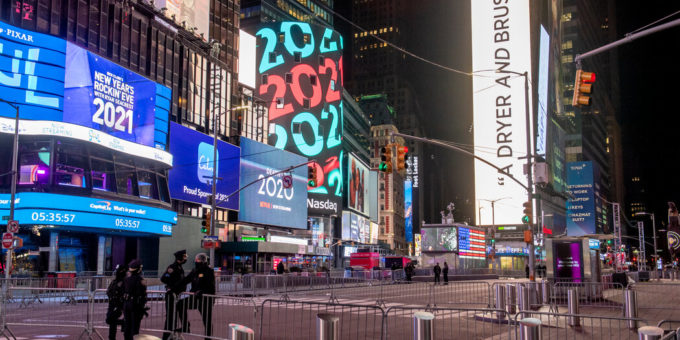 Life was supposed to return to normal this year. Instead, 2021 turned into a kind of purgatory. But there is good reason to hope 2022 will be better.

As this year comes to a close, we want to look back on the arc of the pandemic — and look ahead to the new year that starts Saturday.

This past year began with the ramping up of a mass vaccination campaign, which many people celebrated by taking post-shot selfies of their bandaged arms. By February, new Covid-19 cases were plummeting, and by spring, the virus seemed as if it might be in permanent retreat. On June 2, President Biden gave a speech looking ahead to “a summer of freedom, a summer of joy.”

But then came a turning point of 2021: the emergence of the Delta variant.

It began spreading in the U.S. in the late spring and caused many more infections among the vaccinated than earlier versions of the virus. The overwhelming majority of these breakthrough infections were mild, but they did have the potential to cause serious illness in the older and other vulnerable people.

Delta also sparked new outbreaks among the unvaccinated, and tens of thousands of them died. Ultimately, the U.S. death toll from Covid in 2021 — more than 475,000 — exceeded the 2020 toll. The increase is especially tragic, epidemiologists say, because the availability of vaccines had made most of those deaths avoidable.

In addition to the direct damage from Covid, the disruptions to daily life — intended to slow the spread of the virus — have brought their own costs. Children have fallen behind in school, and for many, isolation has worsened their mental health. Adults are struggling, too; Americans’ blood pressure has risen, and drug overdoses have soared.

Even people who have avoided the worst of the pandemic’s damage often feel fed up. And the latest variant, Omicron, has sent cases soaring again, to their highest levels yet, and raised the prospect that 2022 will be another year of pandemic purgatory.

At this point, it should be clear that there are no Covid guarantees. Perhaps future variants will emerge, even more dangerous than Omicron or Delta. But the most likely scenario is more hopeful, many experts believe. As the New Year arrives, there are reasons to hope that 2022 will become what people expected 2021 to be — the year that Covid switched from being a pandemic to an endemic virus, not so different from the flu.

Emerging evidence suggests that Omicron really is milder than earlier versions of this coronavirus (either because of intrinsic biological reasons or because of higher levels of population immunity). In South Africa and England, as well as New York, San Francisco and other parts of the U.S., hospitalization numbers are lower than doctors feared.

But when the current surge begins receding, it will likely have left a couple of silver linings. Omicron is so contagious that it will have infected a meaningful share of the population, increasing the amount of Covid immunity and helping defang the virus.

As important, the world has more powerful weapons to fight Covid than it did only a few weeks ago: two new post-infection treatments, one from Merck and a more powerful one from Pfizer, that lower the risk of hospitalization and death. With Pfizer’s treatment, the reduction is almost 90 percent, according to early research trials.

All of which suggests that the U.S. could emerge from the Omicron wave significantly closer to the most realistic Covid future — one in which it becomes an endemic disease that is a more normal part of daily life. It will still cause illness and death; a typical flu season kills about 35,000 Americans, most of them older. For the foreseeable future, battling Covid — through vaccination, treatment and research — will remain important.

But endemic disease does not need to dominate life the way a pandemic does. It does not need to cause the sort of social isolation and public health problems that Covid has over the past two years.

If the U.S. reaches that point in 2022 — as looks likely — the next New Year’s Eve will feel a lot more satisfying than this one.

Pakistan’s economic position will be ‘far better’ by August: Fawad

KL Rahul To Lead India In ODIs vs South Africa, Rohit Sharma To Miss Series Due To Injury

New Menu Alert: This French Fiesta At The Imperial Is A Sumptuous Mix of Nostalgia and Pure Indulgence
2019-07-13