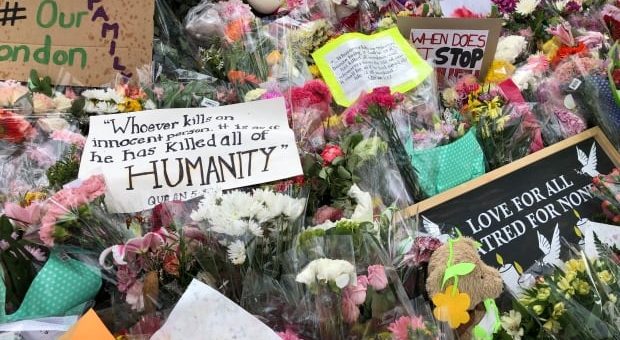 The 20-year-old charged in the fatal truck attack of a Muslim family in London, Ont., is set for his next court hearing today.

Nathaniel Veltman, 20, of London was charged earlier this week with four counts of first-degree murder and one count of attempted murder.

His hearing Thursday will be accessible virtually because of COVID-19 restrictions.

On Sunday, a family of five was out for an evening walk in northwest London when a black truck left the road and drove into the family as they were waiting to cross the street at a red light.

Salman Afzaal, 46, his wife Madiha Salman, 44, their daughter Yumna Afzaal, 15, and Salman’s mother, Talat Afzaal, 74, were killed. The youngest member of the family, nine-year-old Fayez, survived and remains in hospital.

Police say the family was targeted because of their Muslim faith, and they’re in touch with RCMP and prosecutors about the possibility of filing terrorism charges against Veltman.

Since his arrest less than 10 kilometres from the scene, Veltman has been housed at the Elgin Middlesex Detention Centre.

At his first court appearance, on Monday, he did not have a lawyer, but was represented by duty counsel.

At the time, the justice of the peace issued a no-contact order between Veltman and two dozen people, including bystanders at the scene.

This is the first mass murder in the history of the southwestern Ontario city.

After losing Luhansk, Ukraine forces gather for defence of Donetsk
2022-07-05

Coronavirus outbreak: Why you should avoid wearing gloves while shopping for grocery
2020-05-31