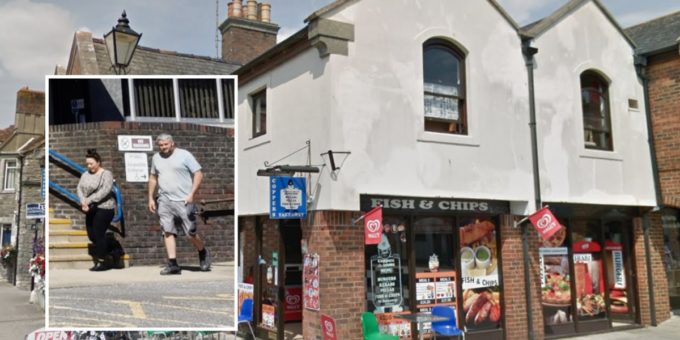 A DRUNKEN couple trashed a kebab shop and caused more than £1,000 worth of damage on a night out – after getting angry because the chicken they wanted wasn’t available.

Wanting chicken on the bone, the drunken pair were told by a staff member that there wasn’t any. The row appeared to suddenly escalate, and Cooper and Stanley began to argue with an employee.

Prosecuting, Richard Oakley, told Weymouth Magistrates’ Court how Stanley tried to hold an argumentative Cooper back, but the row continued to escalate.

He said: “The two defendants entered the Coppers kebab shop in Wareham to order some food. They were both drunk.

“They wanted chicken on the bone and when they were told there was none, Cooper became antagonised and started throwing stuff off the counter.

“Stanley tried to stop her and the owner came out to see what was going on.”

From here, Mr Oakley said the argument went onto another level, as Cooper threw a chair against a window and shattered it.

He continued: “Cooper started picking up chairs and threw it against a window and caused it to smash.

“Stanley then threw cans at staff members. He entered the staff area and threw a drink and hit the owner, causing an injury.

“He threw a can of Coke at the owner which hit him on the right side.

“They were both interviewed by police, and admitted the offences after being shown the CCTV.”

The pair outside court

Mr Oakley added that jars, a bottle, table were used as ‘weapons’ and observed that while the store owner was hurt, ‘luckily it wasn’t a serious injury.’

The court was shown CCTV footage of the offence, which showed Cooper and Stanley leaving the shop, before Stanley got angry and shouted at the members of staff.

Stanley threw a drink at the store owner, Muslim Temel, which struck him on the right arm. A chair was also seen to be thrown and the couple continued to argue inside the shop.

Stanley also threw a can of Coke at one staff member and threw another drink but missed on both occasions.

Cooper also knocked down drinks on display before leaving the shop to pick up a table which she threw over the counter.

Meanwhile, Stanley had lifted the serving hatch and made his way behind the counter to continue arguing with employees.

Stanley watched the footage in shock while Cooper was unable to watch.

Cooper, of Trinity Lane, Wareham pleaded guilty that she committed damage to the sum of £1,103.99 at the kebab shop, which included damaging a table, chairs, window and window graphic.

Stanley, of Sandy Lane, Upton, Poole damaged stock and a serving hatch to the value of £103.18 and pleaded guilty to criminal damage and assault of a man by beating.

Aileen Tring, defending Stanley, and Des Reynolds, representing Cooper, did not offer mitigation at the hearing.

Chairman of Magistrates, Richard MacRae, adjourned the case until Thursday, June 24 at Weymouth Magistrates’ Court for a pre-sentence report.

Cooper and Stanley were released on conditional bail.