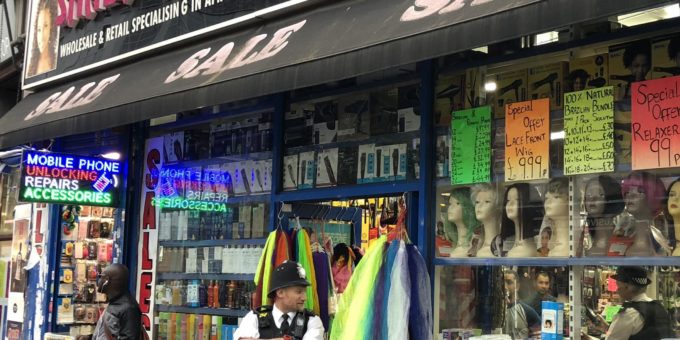 An undercover test purchase of illegal skin lightening cream was carried out by Southwark Trading Standards, at Shaba Hair and Cosmetics on 18 August 2018.

The test purchaser asked for the product, Caro White Lightening Beauty Cream, by name and it was fetched from the back of the shop. The test purchaser wore a covert camera and this identified the man at the till as Tasweer Iqbal. The cream was labelled as containing hydroquinone and analysis confirmed 4.3%.

Hydroquinone can cause skin thinning, uneven skin tone and texture, facial scarring and even increase pigment production in the skin.

It is banned in cosmetic skin lighteners throughout the EU and can cause dangerous long term health effects including cancer, and kidney, liver and nerve damage. It is also very dangerous to use when pregnant.

Covert filming at the store

Further to the test purchase, Southwark Trading Standard conducted a raid at Shaba Hair & Cosmetics on Saturday 6 October 2018. Illegal skin lighteners were found concealed at the rear of the premises, hidden under the floorboards.

Some were on shelves in the store and others in plastic bags behind the sales counter.

Iqbal, aged 45, West Green Road, N15, pleaded guilty to all charges was sentenced to a 200 hour community order, to be completed within a year and he was found liable for half the costs: £3,843.

When sentencing, the judge talked about the aggravating features of the case. These included the high financial gains, deliberate concealment of banned goods and the impact on the wider community, resulting from illegal labelling that left customers with no idea what they were applying to their skin.

She was also satisfied that Iqbal clearly knew exactly what he was doing, by virtue of the concealment of toxic goods and Southwark Council’s video footage of him selling illegal products, from under the counter.

The business was sentenced to pay the other half of the costs: £3843 and £20,000 in fines. Southwark Council will proceed to destroy all of the goods seized during the investigation.

Cllr Victoria Mills, Cabinet Member for Finance, Performance and Brexit, said: “We have prosecuted Shaba Hair and Cosmetics on two previous occasions for supplying illegal and dangerous cosmetics to vulnerable people. The company and its directors have deliberately and systematically ignored the advice given by Southwark Trading Standards and the court.

“This result shows that the court supports the council in condemning the practise of putting consumers at risk for financial gain. This is a message to other vendors to sell products that comply with the law and put consumer safety first.”

Ali Tareen Shares His Experience Of Being A #GirlDad In Pakistan