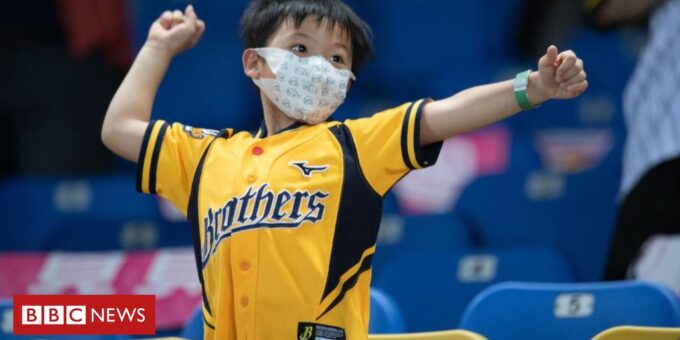 For the first time since the coronavirus pandemic began, health officials will come together (virtually) next week at the World Health Assembly to decide how the world should tackle the crisis.

But one of the places that’s been most successful at protecting its people from the disease will not be invited to this meeting of the decision-making body of the World Health Organization (WHO).

Taiwan has been applauded internationally for quickly and effectively stemming the spread of the virus, and says it should have a platform to share its experiences with the world.

But China – which says Taiwan is part of its territory – has blocked Taiwan’s attendance since 2016.

In recent weeks, the US, EU, Japan and several other nations have backed Taiwan’s bid to attend the meeting on 18 May as an observer.

China – facing international criticism for both being the source of the pandemic and missteps in the early days of the spread – has hit back with zeal.

The Taiwan dispute is long-running, but Shelley Riggers, professor of political science at Davidson College and long-time Taiwan researcher, says there may now be “diminished patience” from some countries with an objection from China which “feels very abstract and ideological in a moment of, you know, global catastrophe”.

Why is Taiwan’s attendance controversial?

Taiwan has been self-ruled since the mainland government was toppled by the Communist Party in 1949 and fled to the island.

Under its One China policy, Beijing insists it is the legitimate ruler of Taiwan and it will one day be brought back under the leadership of the mainland, by force if necessary.

The current government in Taiwan is seen as pro-independence and since Tsai Ing-wen’s Democratic Progressive Party took power, relations with Beijing have soured.

Taiwan has its own army and currency and is treated by some governments as though it’s a de-facto state.

“China’s pretty steadfast on this, and it has nothing to do with public health and everything to do with China’s relationship with Taipei, and with President Tsai-Ing-wen who refuses to recognise China’s sovereignty over Taiwan,” says Drew Thompson, former US Defence department official responsible for China, Taiwan and Mongolia.

Under Chinese pressure, all but 15 countries have cut diplomatic ties with Taiwan. But Taiwan has lobbied hard to be recognised by multi-lateral organisations like the WHO and others, as a way to seek legitimacy in the international arena.

And it hasn’t always been left out. Under the previous government – which wanted better relations with China – it had observer status at the WHO under the name “Chinese Taipei”. But since 2017, after Tsai Ing-wen’s election, it has not been invited back.

Every year since then Taiwan has lobbied member countries to be included. But ahead of this year’s meeting, the voices of support have come loud and clear.

Experts say while in the past other countries may not have thought it worth it to risk offending China, that calculation has changed with Covid-19.

How does Covid-19 change things?

Taiwan has had astounding success battling the coronavirus. It has recorded only 440 cases and seven deaths in a population of 23 million, attributed largely to early border controls, a ban on foreign visitors and mandatory quarantine for all Taiwanese people returning home.

This has given it a renewed impetus and justification to be included in decision-making about global health.

On 8 May leaders of the US Congressional Foreign Affairs Committee sent a letter to nearly 60 countries saying it “had never been more important to ensure all countries prioritise global health and safety over politics”.

It said China’s “bullying tactics” had “undermined Taiwan’s ability to contribute to international response efforts” and put everyone at greater risk, so it must be allowed to attend the WHA meeting.

Several major powers have responded, including the EU, Japan, Canada, Australia and New Zealand, though none is suggesting abandoning the One China policy, which gives Taiwan its ambiguous status.

Taiwan has also won global plaudits for transparency in sharing information about coronavirus cases as well as for helping other nations with supplies like masks, even those that don’t recognise it.

The US has had a long-standing policy of support for Taiwan, as a key ally. So coronavirus may just be a new way to argue for its inclusion in the WHO.

But for other countries who have been ambivalent about China and Taiwan’s long-running tussle over sovereignty, there are new political considerations, says Alexander Huang a political science professor specialising in China-Taiwan defence and foreign policies.

They’ve watched US-China relations turning sour in recent weeks, but also they are worried about the spill over from the global pandemic as well as suspicions over whether China shared information fully in the early days, he says.

Drew Thompson, who is a visiting professor at the Lee Kuan Yew school of public Policy in Singapore, says global public opinion overall towards China “has turned to the negative. And it’s the result of China’s insistence on its policies; its way or the highway, and its heavy handed diplomacy”.

How has China reacted?

China has always bristled at what it calls foreign interference in its internal affairs. But this time it has really upped the anger and threats, positioning Taiwan’s aim to be present at the WHO as a bid for independence.

State media Xinhua has published article after article lambasting the US in particular.

“There is only one China in the world. The government of the People’s Republic of China is the sole legal government representing the whole China, and Taiwan is an inalienable part of China,” it said.

It also calls on the US to stop politicising the international response to the pandemic.

Global Times, a strident and often nationalist newspaper, published an editorial saying this could put China in a position to use force – an oft repeated threat.

“The only consequence that may ensue is the mainland considering ending this senseless game by solving the Taiwan question once and for all via non-peaceful means,” it said.

Even before the pandemic there had been increased military presence in the South China Sea and the 180km-wide Taiwan Strait that separates the two countries, but shows of strength have turned into warnings.

“In the past three months, China has sent more sorties both by bombers, reconnaissance flights and fighter jets in the air, their navy flotilla has done more exercises than before in the same time period,” according to Mr Huang.

When it comes to other countries, China has made economic threats.

But Foreign Minister Winston Peters said at a press conference: “We have got to stand up for ourselves.”

“And true friendship is based on equality. It’s based on the ability in this friendship to nevertheless disagree.”

Prof Huang says in recent years China’s foreign relations have become much more nationalistic and aimed at protecting its self image, with zero tolerance of any criticism.

“Because of the pandemic, China has become more sensitive to criticism from [the] outside world, and China has now, on the other hand, enjoyed more capacity to show its strength and show its force.”

So can the WHO invite Taiwan?

The WHO has been saying that Taiwan’s membership or attendance is entirely up to the member states. It also says that it already communicate with Taiwanese health officials and information is being shared.

US Secretary of State Mike Pompeo said recently that the director-general had the power to invite Taiwan, but the WHO’s principal legal office Steven Solomon said director-generals only extend invitations when its clear member states support doing so, which is this case is not clear.

But as Ms Riggers points out, Taiwan was previously able to attend, and other non-state actors like the Palestinian Authority and the Vatican have observer status.

“We’re talking about one country that for one very specific reason is excluded,” she says.

Beyond one two-day meeting, the pandemic has given new relevance to the question of Taiwan’s participation on the global stage.

As long as its status remains ambiguous, it’s likely that the issue of sovereignty will continue to be a proxy battleground in disputes with mainland China, even after the virus has moved on.

Fred Willard, Comic Actor Who Thrived in Ensembles, Dies at 86