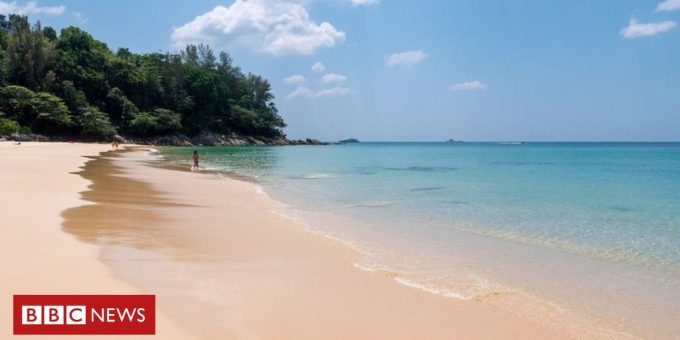 Yet the statistics speak for themselves. In 1960 around 80,000 foreign tourists came here.

Last year it reached 39 million, earning more than $60bn (£46bn) for Thailand, and indirectly contributing around one fifth of the country’s national income.

The country’s tourism sector was considered so robust that the country got the nickname “Teflon Thailand”. Yet of those 39 million tourists last year, more than 10 million were Chinese.

So when the Chinese government quarantined the city of Wuhan on 23 January, and stopped all overseas tours, the impact was felt immediately in Thailand. Shopping malls and temples in Bangkok were suddenly much quieter and less crowded.

As more flights from China were cancelled, the airports emptied. You could whisk yourself through passport control in no time.

For small-scale entrepreneurs, the collapse of Chinese tourism has been disastrous.

Many of them, such as flower sellers, traditional dancers, and the drivers of the famous “red cars” minibuses in Chiang Mai, are reporting their income dropping by half over the past month. The informal association representing tour guides in Thailand thinks 25,000 people are now out of work.

One of the first successes of Thailand’s 60-year-long tourist boom was the island of Phuket, nicknamed the “Pearl of the Andaman” for its soft white-sand beaches and sparkling warm seas.

The first foreign visitors in the 1980s and 1990s were mainly European and Australian, but the number of Chinese visitors last year shot up to about two million out of the 15 million foreigners.

The mangrove-lined inlets on the east side of the island, a contrast to the beaches facing the west, are where the boats leave from to take tourists out to the islands offshore. Like many of Phuket’s residents, Nattakit Lorwitworrawat moved here from his home town elsewhere in Thailand to start a business.

His company now owns 30 speed boats, each able to carry 30 people. He has had to take 20 out of the water, and the remaining 10 are not getting much use. The inlet, normally constantly noisy from the sound of outboard motors, is now silent apart from the birds and the lapping water.

“At the peak two years ago we carried 1,000 clients a day. Today if we get 200 clients, that is considered very good – we would be very happy with that,” says Nattakit.

He has bank loans to service on many of his boats. If the crisis goes on beyond the end of this year, he says he will have to downsize the company and start laying off his staff.

For those lower down the food chain it is even tougher.

Somkiat Prasarn has a mortgage on his little house, and loans on the van and car he bought to take Chinese tourists out on day trips around the island. He is supporting four children and an elderly mother.

His monthly payments on the loans, he said, are around $1,500 a month. Could he hold out for six months, I asked him? “I cannot, sir,” he says. Right now he is getting no custom at all apart from the occasional airport pickup.

“The government needs to help us and soon,” says Sarayuth Mallam, vice-president of the Phuket Tourism Association. “We don’t ask for much. But if they want us not to lay off staff, they have to help us by cutting or delaying tax payments, social security payments, and giving soft loans to businesses here.”

Sarayuth also believes the powerful Tourism Authority of Thailand needs to start promoting Phuket aggressively in other markets outside China, like Russia, India and Australia. If they can control the virus in three months, he says, we can survive and come back.

But nobody knows how long this crisis will last, nor how serious it will become. For the moment there are still plenty of Europeans, Australians and Russians on the famous beaches, but for how long?

The authorities here have managed to control and monitor infections well considering how vulnerable it was from the number of Chinese people visiting before the restrictions on travel were implemented.

Yet the country has already been placed on some government lists of places to avoid because of coronavirus risk.

And people are booking holidays for later in the year, including the traditional high seasons of July-August and December-New Year in Thailand.

Families with children from Europe or Australia are likely to think twice before travelling so far. And Thailand is now imposing its own restrictions, requiring 14-day quarantine for visitors from some countries, a list that may well expand.

Who will risk booking a holiday in the sun if they end up spending it confined to their hotel room or a hospital?

With more flights being cancelled every week, the numbers of non-Chinese tourists are bound to fall steeply this year, however quickly the virus is brought under control.

The blow to this essential leg of Thailand’s economy has come at a terrible time for the government. Already the other two main legs of the economy – manufacturing exports and agricultural commodities – are wobbling as higher wages and an overvalued local currency have been driving investors to cheaper neighbouring countries like Vietnam.

Growth in what was once one of South East Asia’s “tiger economies” has been anaemic for several years, and may stall completely this year. The government, an unwieldy coalition controversially built around the same military leaders who led the last coup, is proving clumsy and unpopular.

It is an almost perfect storm, one that Thailand’s present leaders look ill-equipped to weather.

More from the BBC’s series taking an international perspective on trade:

Jenelle Evans Goes OFF: My Freakin’ Mom Got Jace Vaccinated Without Telling Me, Dude!
2021-08-04