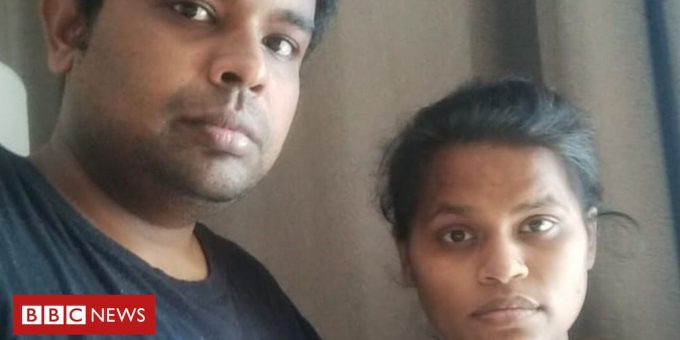 They had been told to leave their home in the same building in Dubai by the landlord after they ran out of money to pay the rent. Eventually, a local charity came to their aid.

For Mr Kumar, the nightmare started in February, when he was laid off by the hotel where he worked.

The hotel cut down its operation after the coronavirus pandemic dealt a huge blow to its revenues. It did not even pay Mr Kumar for the last month that he worked.

Since then, he and Premlatha, whose pregnancy has been complicated by diabetes, have been trying desperately to return to their hometown of Madurai in India.

“I have no money to pay for my wife’s delivery, nor do I have the funds to buy a flight ticket,” Mr Kumar told the BBC. “The doctors say that if she travels after she enters her 33rd week of pregnancy then that will be a huge risk for the baby and her health. I just want to save my child.”

Mr Kumar is one of the tens of thousands of migrant workers to have lost their jobs across the Gulf as a result of the economic downtown caused by the pandemic.

Those worst hit are the low-income labourers who came to the region looking for work to support their families back home financially.

For decades, migrant workers have played a key role in building the economies of Gulf Arab states, providing the manpower for the key construction, hospitality, retail and travel sectors.

The six Gulf Co-operation Council (GCC) member countries – Saudi Arabia, the United Arab Emirates (UAE), Qatar, Bahrain, Kuwait and Oman – host the majority of the 23 million migrant workers living in Arab states, according to the International Labour Organization. Most are from Asia.

Having lost their jobs, many of those migrant workers want to return home. But commercial flights have all but stopped.

In response to pressure from the Gulf states, India and Pakistan have started organising special flights to repatriate citizens from the region. However, that is proving a huge challenge.

In the UAE alone, more than 200,000 Indian nationals have registered to be repatriated. Last week, almost 2,000 were flown back to India.

The Indian government says it will operate more flights in the coming weeks, but it is prioritising people with short-term visas, those with medical emergencies, pregnant women and the elderly. And due to the limited number of seats, even those who meet the criteria are finding it difficult to get on the flights.

Some Indians are also struggling to find the money to pay for both their flights and their 14-day stay at a quarantine facility in India.

Mohammad Anas shares a room with nine other Indian workers. All of them used to work for a travel firm, but they were laid off in February. Mr Anas is owed two months’ salary.

“I was hoping get a booking on one of the flights that flew to India last week, but I didn’t get a call back from the Indian consulate. I wrote to them that I have no job and no money,” he said.

The Indian government plans to evacuate 200,000 Indians from across the globe over the next three to four weeks. It has announced about 35 repatriation flights for the Gulf region between 16 and 23 May.

Pakistan has flown home close to 9,000 citizens from the UAE since the start of April. According to the Pakistani embassy, more than 60,000 Pakistani nationals have registered for repatriation.

But many Pakistani nationals like Babar Hanif want the government to operate more flights because they are finding it difficult to survive without a job.

Mr Hanif has been working in Dubai for more than 15 years. But in February his company put him on indefinite unpaid leave.

He has been trying to book seats on a repatriation flight for several weeks.

“I cannot afford the expenses here. I have called the Pakistan embassy multiple times, but I got no answer from them,” he told the BBC.

Charities say they have been approached by thousands of South Asian workers for help. They are providing them food with the help of local authorities.

“A lot of these workers were earning very low salaries. And the numbers in that segment are huge,” said Joginder Singh Salaria, founder of the Dubai-based charity PCT Humanity.

At the same time, Gulf countries have been battling to prevent the coronavirus from spreading in the overcrowded camps housing many low-income migrant workers.

Most rooms in the camps are shared by six to 12 people and following hygiene guidelines and adhering to social distancing measures is all but impossible, according to Amnesty International.

“No-one should ever be living in these conditions, but the spread of Covid-19 has highlighted the severity of the situation and the need to urgently rectify it,” the human rights group warned.

Local authorities have locked down the camps and stepped up testing for infections. Some have also taken steps to reduce overcrowding.

Despite such efforts, the number of Covid-19 infections has continued to rise.

The UAE government acknowledges that the crisis has had a significant impact on low-income migrant workers, but insists that it is helping them.

“We implemented a number of measures to protect and support them, including automatic extensions of visas, the provision of accommodation and food, and guaranteed access to free-of-charge healthcare,” a foreign ministry spokesperson told the BBC.

“Workers also benefit from the [Covid-19] testing programme, which has ensured the availability and efficiency of testing near worker accommodation.”

The UAE and Saudi governments have also relaxed restrictions on commercial activities in recent weeks, and announced stimulus measures to boost their economies.

But with the pandemic not yet under control, businesses are going to find it difficult to resume normal operations anytime soon.

Many migrants like Mr Anas feel finding a new job in such an environment will be impossible.

“I came here to fulfil my dreams, but now I just want to go back to my family,” he says. “I don’t care if that means that I end up earning less money.”

U.S. Is Said to Plan to File Antitrust Charges Against Google

Deepika Padukone stuns in traditional attire at an event in California; see pics
2022-07-06