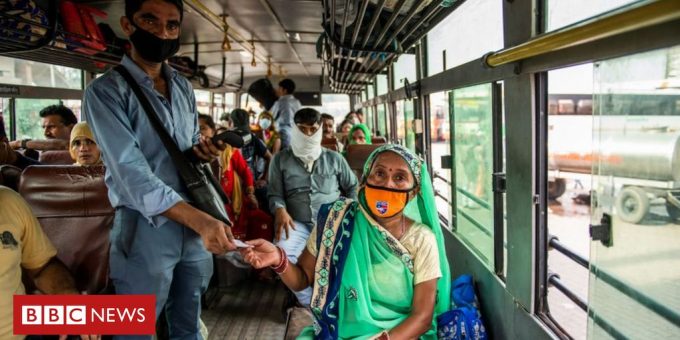 More than two million Indians have now tested positive for Covid-19, according to official figures.

The country confirmed the last million cases in just 20 days, faster than the US or Brazil which have higher numbers.

Testing has been expanded considerably in India in recent weeks but the situation varies across states.

Spurred by a low death rate, the nation continues to reopen even as new hotspots drive the surge in cases. But some states have imposed restrictions.

The country has reported around 40,700 deaths so far. While that is the world’s fifth-biggest total, experts say it is not very high given the country’s population of 1.3 billion.

The government, however, has been accused of undercounting Covid-19 deaths due to a variety of reasons – from lags in reporting to rules on how India determines if a death was caused by the virus.

Meanwhile, India has been steadily “unlocking” its economy since early June after a gruelling lockdown that lasted nearly two months. Gyms and fitness centres are the latest to reopen.

Testing has also gone up but it remains patchy as some states are doing as many as 40,000 test per million, and others as few as 6,000.

Case numbers are rising rapidly, for instance, in the southern state of Andhra Pradesh. It shot up the list this past month, and now accounts for India’s third-highest caseload.

India, as one expert told me, was a “slow burning coil” for a long time when it came to the spread of the coronavirus. In that sense, it was different from the US and Brazil, the two other big countries badly hit by the pandemic.

India is also generating the highest number of daily new cases in the world. What is making it difficult to contain the infection is the country’s size, population and heterogeneity. In what has become a “patchwork pandemic”, infections are waxing and waning in different states at different points.

The success in containing the infection in the Dharavi slum in Mumbai and the capital, Delhi, show that India is not defenceless against the virus. But India needs to realise that it needs a more robust federal strategy to contain a virus that is going to stay with us for a long time, experts say.

The country needs to bring together “public health, health care, social support and financial sectors together” with strong political leadership at every level to forge a national containment strategy, says epidemiologist Bhramar Mukherjee

Also, the strategies need to be different for different parts of India. The country simply cannot afford another grinding lockdown. But, as Dr Mukherjee says, “we cannot let our guards down and surrender to destiny”.