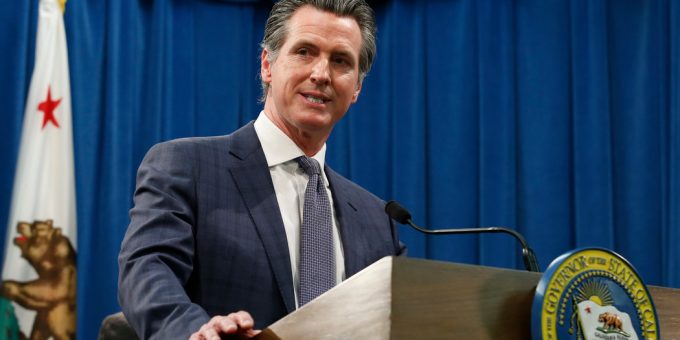 (Here’s the sign-up, if you don’t get California Today by email.)

In the coming days, my colleague Marie Tae McDermott will be helping me answer some common questions about the coronavirus outbreak. (Thanks for emailing us, if you did!)

Here’s the first one she tackled: Is California still in a state of emergency? And what does that mean?

Officials in California have continued to respond to the growing number of coronavirus cases by closing down schools, canceling events, advising some people to stay home as much as possible and banning large gatherings.

The total number of cases in the state has climbed to 201 as of late Wednesday night, with four deaths reported.

[See The Times’s map of every reported case in the U.S.]

California is one of 13 states so far that has implemented a tool to quickly mobilize resources and loosen regulations in the effort to curb the outbreak.

That is declaring a state of emergency.

California’s state of emergency was formalized on March 4, just over a week ago.

[Catch up on the number of cases in California and more here.]

“The State of California is deploying every level of government to help identify cases and slow the spread of this coronavirus,” said Gov. Gavin Newsom in a statement. “This emergency proclamation will help the state further prepare our communities and our health care system in the event it spreads more broadly.”

The declaration, issued in writing, allows for the governor to release state funds and resources to agencies responsible for treating the epidemic. It also ensures that certain out-of-state medical workers can provide services in California and prevents price gouging on crucial supplies, like masks and gloves.

[Can you be forced into quarantine? What you need to know.]

The day before issuing the proclamation, Mr. Newsom released a stockpile containing millions of N95 masks for use by health workers.

Ahead of the statewide declaration, some local governments, like San Francisco, Santa Clara and San Diego Counties, declared their own local health emergencies.

In California, the provisions outlined in the state’s emergency declaration remain in effect until officials deem that they are no longer warranted. When that will be, however, remains to be seen.

Here’s what else to know about the outbreak today

Coronavirus cases in the U.S. have surpassed 1,000, and the World Health Organization officially declared it to be a pandemic. In California, as of late Wednesday night, 201 cases of the virus had been reported, and four people died.

California has become the latest state to impose new measures aimed at containing the virus, telling residents to postpone or cancel gatherings of more than 250 people, including sports events, conferences and concerts, through the end of March.

The new guidelines also advised against gatherings in smaller venues, such as auditoriums, that don’t allow for six feet of distance between people. Groups of high-risk people, such as those in retirement or assisted-living facilities, should be limited to no more than 10 people, officials said.

[Here’s a glossary of terms you may need to know.]

“Changing our actions for a short period of time will save the life of one or more people you know,” Mr. Newsom said in a statement. “That’s the choice before us.”

If you missed it, here’s why big employers have a financial incentive to give paid sick leave. [The New York Times]

Also: The Times wants to hear about how the coronavirus outbreak has affected your college. Click here to submit a video or write to us.

Here’s what else we’re following

We often link to sites that limit access for nonsubscribers. We appreciate your reading Times coverage, but we also encourage you to support local news if you can.

These, as too many people have noted on Twitter, are apocalyptic times — or at least on Wednesday, the pileup of globally consequential news made it feel that way.

I hope you’re all taking care of yourselves as healthily as you can.

Maybe it soothes you to look at some austere aerial photos of California City, which, according to Wired, was a planned metropolis in the Mojave Desert that never materialized. Maybe you enjoy fantasizing about starting a new Stone Age life you could never actually afford. (I don’t know your life.)

I’ll be digging into one of my favorite things that The New York Times makes: The Magazine’s interactive 25 Songs That Matter Now feature.

Maybe you also want to listen to the songs, read the artist profiles, send yourself down a Spotify rabbit hole and blast the music in your apartment while you’re working from home.

And you can always revisit our California Soundtrack.

California Today goes live at 6:30 a.m. Pacific time weekdays. Tell us what you want to see: CAtoday@nytimes.com. Were you forwarded this email? Sign up for California Today here.

Jill Cowan grew up in Orange County, graduated from U.C. Berkeley and has reported all over the state, including the Bay Area, Bakersfield and Los Angeles — but she always wants to see more. Follow along here or on Twitter, @jillcowan.

England vs India: Nothing Was Said Between Mohammed Siraj And Me, Says Jonny Bairstow On Silent Send-Off
2021-08-11