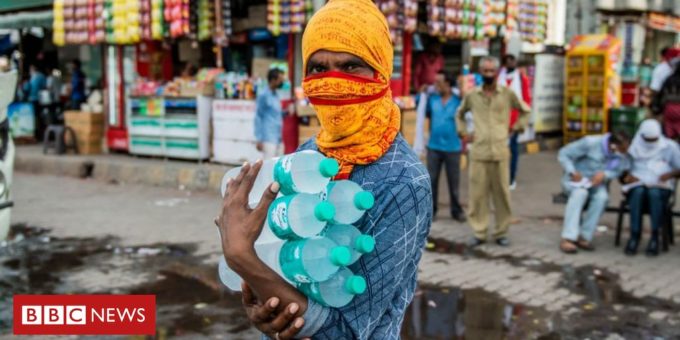 India reported 62,170 new Covid-19 infections in the last 24 hours and with that it became only the third country to cross the two million mark.

It has added one million cases in just 20 days, faster than the US or Brazil, both of which have a higher caseload.

Given India’s dense population, the numbers are unsurprising. But experts say the virus could have been slowed.

They blame a hasty lockdown, patchy test and trace and ineffective safety protocols.

Even as active cases appear to wane in what used to be hotspot areas – Delhi, Tamil Nadu and Maharashtra – they are surging elsewhere.

“We have seen a fair amount of travel between rural and urban areas, and we are seeing the virus now entering rural areas and spreading there,” says Dr Srinath Reddy, president of the Public Health Foundation of India and an advisor to the federal and state governments on tackling Covid-19.

The lock and unlock effect

One of the states where cases have been rising fast is Bihar – millions of people from this poor northern state move to cities in search of better jobs and it’s their return that is believed to have set off case numbers here.

India’s swift lockdown in March left millions of urban workers jobless and most of them returned to their villages in April and May.

Other states that also send migrant workers out in large numbers – such as Uttar Pradesh and Orissa – have also been seeing high rates of increase.

It’s hard to trace the virus’ path clearly because data is scarce and uneven, but anecdotal evidence shows that many of these states, some of the poorest in the country, struggled to effectively quarantine those coming from hotspot cities such as Delhi or Mumbai.

“This is a virus that came to India on international flights – it landed in cities like Delhi and Mumbai,” says virologist Shahid Jameel. But “because of the hasty lockdown”, he adds, migrants took the virus from cities to villages.

And numbers started to grow as India began reopening in June – unable to afford the lockdown any longer – and testing increased. People began travelling across states, and even within states more, possibly ferrying the virus along the way.

Dr Reddy says the spread in rural areas is relatively slower because there are “more open spaces, you travel over longer distances”.

But the virus has certainly arrived in rural India as can be seen from the fact that cases are rising the fastest in the southern state of Andhra Pradesh which is not home to any sprawling cities – such as Delhi, Mumbai and Chennai – that fuelled the pandemic in India initially.

Eight of the 20 districts reporting the highest active cases in India now are from Andhra Pradesh – and all except one are rural. The state has shot to third place in the national tally. In the past week, its case numbers have gone up by an average of 7.8% – nearly double that of the national average 3.4%.

District officials told BBC Telugu that the reason for the spike was migrant workers returning home from cities as well as fishermen arriving from the neighbouring state of Tamil Nadu.

And although India is yet to restart international flights, repatriation flights from abroad have brought home hundreds of thousands of people. Andhra Pradesh saw many of its overseas workers returning from Gulf countries – this too, officials say, led to more positive cases.

But Andhra Pradesh was also testing a lot – at 44,000 tests per million, it has one of the highest testing rates per capita in India. So why did it fail to contain the virus?

‘Testing is not the acid test’

“If only tests were the acid test, the US should be flying high,” says Dr Reddy.

The US has high testing rates, but has also struggled to curb the virus or keep the death toll low.

“When you are uncovering a lot of cases and death rates remain low, there is this feeling that there isn’t as much to be feared from the virus,” he adds.

The death rate from the virus is relatively low across India, although the government has been accused of undercounting Covid-19 deaths.

In Andhra Pradesh, Dr Reddy says, the state did a good job in testing, tracing and even isolating suspected patients.

But none of this proved enough as economic activities resumed and the authorities struggled to continue with the efforts.

“After the lockdown was relaxed, people gathered for parties, weddings, birthday celebrations. The rules are not being followed. How can the authorities stop them? How many people can be prosecuted for neglecting their responsibility?” Dr M Mallik, East Godavari District Medical and Health Officer, told BBC Telugu.

Dr Reddy says this is happening in many other states as well, but case numbers are not rising due to lower testing rates. Bihar, for instance, is doing as few as 6,000-7,000 tests per million, compared to Andhra Pradesh’s 44,000.

But India’s testing data comes with caveats as the country is increasing its use of antigen tests, which are faster but less reliable than the RT-PCR test. India’s guidelines require that anyone who gets a negative antigen test result must be retested with an RT-PCR kit, but it’s unclear how often that is actually happening.

And antigen tests account for 30% of India’s tests, according to the Indian Council of Medical Research.

Chink in the armour

“There is a chink in our strategy,” Dr Jameel says. “Testing is below par and variable across the country. Tracing is patchy and isolation is not being followed effectively.”

“But there’s also the whole attitude towards the outbreak – that life can go on as usual.”

He says this cavalier attitude is leading to more gatherings and lesser use of masks – people have even taken to wearing them below the nose.

And the political leadership, he adds, is behaving in a way that runs counter to the message.

He points to Prime Minister Narendra Modi’s appearance this week at a ceremony to lay the foundation stone for a temple.

At the event too, some 300 guests sat side-by-side, dutifully masked, to watch Mr Modi perform rituals. And outside, people gathered in close groups in the streets and on rooftops to watch the televised event or catch a glimpse of it in real time.

“All this is telling the country that everything is fine but the numbers don’t say that,” Dr Jameel says.

Stylists Kazim and Priyanka talks about men’s fashion, their journey and more
2021-12-30