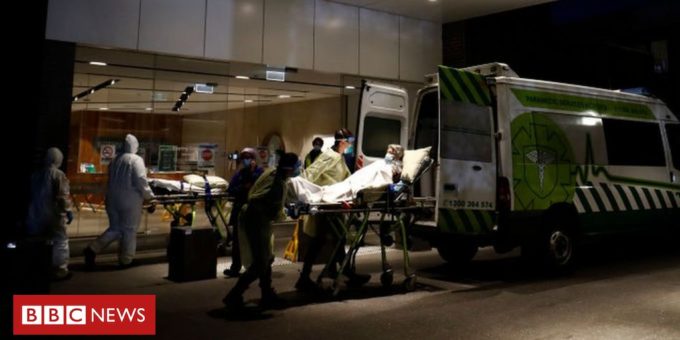 Margaret Alcock sheltered from bombs during the Blitz, crossed an ocean to live in Australia, and was evacuated to safety during last season’s bushfires.

The 89-year-old – who is my nanna – used stoicism and black humour to cope during those times. It’s the same now with Covid-19.

“I do sometimes wonder how on Earth I’ve ended up here with coronavirus around me,” she tells me over the phone from New South Wales (NSW).

“But I’ve seen worse things happen, and I don’t worry about it.”

When the coronavirus reached Australia in January, my family assumed that my grandparents – both of whom live in aged care homes – were in the safest place possible.

Five months on, the sector has seen scores of outbreaks and 156 of Australia’s 247 virus deaths. This includes 12 of the 15 announced on Wednesday – Australia’s deadliest day yet.

In a deepening crisis, some providers have been accused of failing to protect society’s most vulnerable members. State and federal governments are also facing questions.

Many of these facilities were quick to impose their own lockdowns. Some went beyond the government’s official advice by banning visitors, halting activities and confining people to their rooms.

Margaret has been relatively lucky. Though visitors were forbidden for a while, residents at her home in regional NSW can move around freely.

But my other grandma – aged 87 and also named Margaret – has not left her care home in Melbourne, Victoria, since March. And in the past month, Melbourne has seen infections surge.

Grandma is confined to her room with the exception of short walks down the corridor. She sits in her armchair and eats meals alone.

Despite this, she has only praise for staff at her home who are working under extraordinary pressure. Grandma has upped her word search game and plays “hallway bingo”, where residents sit in doorways as a staff member walks up and down shouting numbers.

“The lockdown is hard but I’ve accepted that it’s for my own welfare,” she says.

“I don’t go to bed worrying about it. It’s hard not being able to see my family but just because they’re not here doesn’t mean they don’t love me.”

The company that runs her home says it has a comprehensive infection plan, a full stock of personal protective equipment (PPE) and strict hygiene measures.

But across the two states, many families have been left heartbroken because lockdowns in other facilities have failed to prevent the virus spreading.

‘We didn’t pay attention to overseas’

It’s not hard to understand why aged care homes are so vulnerable to this virus.

They have elderly populations with underlying conditions, limited medical facilities and a pool of employees who sometimes work across multiple sites, increasing the risk of spread.

In February, harrowing stories began to emerge about the “silent massacre” of Europe’s care home residents.

It should have been obvious that Australia was at risk of a similar situation, according to Professor Joe Ibrahim, who is head of health law and ageing research unit at Monash University.

“Australia’s response was inadequate, underprepared and none of it should have been a surprise,” he said.

“People use the word ‘inevitable’ but that’s not right because it gives the impression there was nothing we could do. We didn’t acknowledge the real risk that Covid-19 [posed] to aged care and we didn’t pay attention to what was happening overseas.”

On 3 March, an employee of the Dorothy Henderson Lodge in Sydney tested positive for Covid-19. By the time that outbreak was declared over in May, 21 residents and staff had been infected and six had died.

Another Sydney facility – Newmarch House – decided to quarantine infected people in their rooms rather than send them to hospital, despite struggling with staff shortages and a lack of PPE. Nineteen residents died and dozens more were infected.

Those cases raised many questions but so far there are few answers. Now it’s happening again.

The state of Victoria is experiencing a new outbreak in both the wider community and care homes. Currently close to 1,200 active cases are linked to 97 separate aged care outbreaks there.

Prof Ibrahim says lockdowns alone were never enough to keep the virus out. “We didn’t have clear policies or a command structure in place [for when a case did occur],” he said.

Opposition leader Anthony Albanese has also called for wide-ranging scrutiny, saying this week: “Why weren’t the lessons learned from Newmarch, which occurred months ago in New South Wales?”

A new control centre has been set up in Melbourne with both state and federal agencies working together to manage the crisis in Victoria.

Prof Ibrahim would like to see a national centre set up to assess every care home in Australia.

“That way we’d be clear about which places are at risk and where to aim resources,” he said. “The response must be swift and definitive – there can be no equivocation.”

A government inquiry has been set up to investigate the sector’s response. It has heard accounts of staff shortages, lack of training and personal protective equipment and delays in accepting help from health authorities.

But the Australian Medical Association has called for the greater scrutiny of a royal commission – the top form of public inquiry. Its Victorian president, Julian Rait, told Nine newspapers the crisis was a “foreseeable tragedy”.

My loved ones are lucky – their care homes remain free of coronavirus. While Margaret Martin remains in strict lockdown, Margaret Alcock is being allowed visitors once again. My mum visited on Saturday to put rollers in her hair.

They laughed, they hugged, they bickered, and, just for a moment, they forgot about Covid-19.

Nanna thinks getting the virus would probably be the end of her, but she’s not going down easily.

“I was chased by a lot of geese when I was younger so I doubt coronavirus is going to get me.”

Ford defends himself against $5M defamation claim by Brad Blair, calls it an attempt to ‘muzzle’ him
2019-04-26