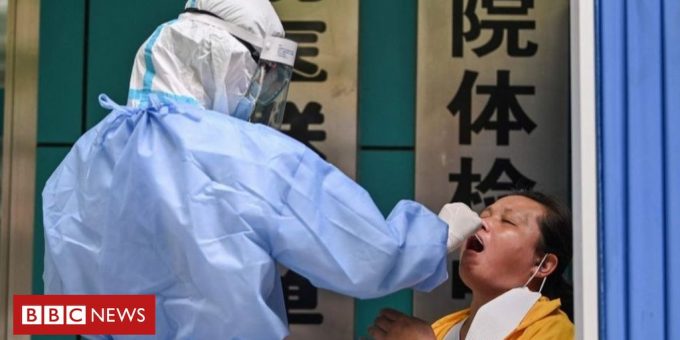 China is drawing up ambitious plans to test the entire population of Wuhan, the city where the Covid-19 pandemic began.

The announcement came after the emergence of six new coronavirus cases in the city – the first ones since early April.

The authorities had originally promised to test all 11 million people in 10 days.

But it now appears they might be aiming for a less ambitious timetable.

How long will the testing take?

In late April, the Hubei provincial government reported 63,000 people were being tested in Wuhan every day.

There are more than 60 testing centres across the city, according to the official Hubei Daily newspaper.

These have a maximum capacity of 100,000 tests a day at most, making it hard to see how a target of testing the entire population in just 10 days could be met.

So the authorities have indicated the tests will not all start and finish within the same 10-day period.

“Some districts [in the city] will start from 12 May, others from 17 May, for example,” the Wuhan Centre for Disease Control said.

“Each district finishes its tests within 10 days from the date it started.”

And according to a Reuters report on 13 May, preparations for carrying out tests had begun in two out of the city’s 13 districts.

What proportion have been tested already?

The authorities say they have now tested more than three million people in the city.

The population of the city – originally 11 million – has also fluctuated over time.

The authorities said up to five million people had left the city for the lunar New Year holiday before it was locked down on 23 January.

The lockdown then lasted until 8 April, but it is unclear how many of these residents have now returned.

Should everyone be tested?

Wuhan University’s Yang Zhanqiu said there was no need to test everyone living in neighbourhoods with no reported cases.

The authorities have said they will begin with people considered most at risk – for example in the older, more densely populated areas, as well as those in key jobs such as healthcare.

Also, people who have been tested in the previous seven days will not need to be tested again.

But Chinese Center for Disease Control and Prevention chief epidemiologist Wu Zunyou told state TV: “The virus could take longer to manifest itself in patients with weak immunity and these people are also prone to ‘on’ and ‘off’ symptoms.”

And US-based Council on Foreign Relations senior fellow for global health Huang Yanzhong said: “There would still be the possibility of isolated outbreaks in the future, which even large-scale testing will not address.”

Additional reporting and research by Yitsing Wang, in Beijing, and Pablo Uchoa and Wanyuan Song, in London.

Send us your questions