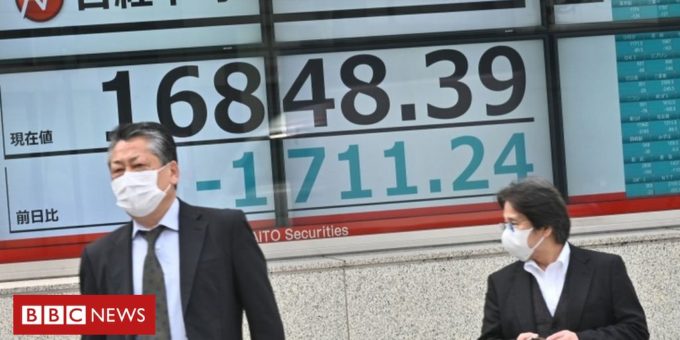 Asian shares have continued the global markets slump on Friday as investors fear the spread of the coronavirus will wipe out economic growth.

Shares across the region, including Japan, Hong Kong and China, have plunged in morning trading.

It followed the Dow and S&P 500 in the US having they’re biggest one-day declines since 1987.

Investors are concerned that emergency action by authorities around the world may be insufficient to avoid recession.

In early afternoon trading Japan’s benchmark Nikkei 225 was 8.5% lower, the Hang Seng in Hong Kong was down by 5.8%, and China’s Shanghai Composite had lost 3.3%. Trading in India’s Nifty 50 stock index was halted for 45 minutes on Friday morning after it fell 10% and hit a “circuit-breaker”.

The selloff gathered pace on Thursday after US President Donald Trump spooked investors when he restricted travel from Europe, and the European Central Bank disappointed markets by holding back on rate cuts.

“There is a sense of fear and panic,” said James Tao, an analyst at stockbroker Commsec in Sydney.”It’s one of those situations where there is so much uncertainty that no-one quite knows how to respond… if it’s fight or flight, many people are choosing flight at the moment,” he added.

Friday’s falls follow steep losses in the US and Europe on Thursday, with benchmark indexes on Wall Street and in the City of London seeing their steepest daily falls since so-called Black Monday in 1987. In France and Germany, indexes lost more than 12%.

The declines came despite actions by the Federal Reserve and European Central Bank to support the market.

Losses on European indexes accelerated after the eurozone’s central bank failed to cut interest rates, although it did pledge fresh stimulus measures.

The New York branch of the Federal Reserve said it was pumping $1.5 trillion to ease strains in the debt markets, offering increased overnight loans to banks and expanding the kinds of assets it will buy to keep firms lending.

The announcement, which came after European markets had closed, briefly sent shares higher, but they dropped back by the end of the day.

Rate cuts by the US central bank last week and the Bank of England on Wednesday also did little to soothe investors.

Why should I care if stock markets fall?

Many people’s initial reaction to “the markets” is that they are not directly affected, because they do not invest money.

Yet there are millions of people with a pension – either private or through work – who will see their savings (in what is known as a defined contribution pension) invested by pension schemes. The value of their savings pot is influenced by the performance of these investments.

So big rises or falls can affect your pension, but the advice is to remember that pension savings, like any investments, are usually a long-term bet.

Please include a contact number if you are willing to speak to a BBC journalist. You can also contact us in the following ways: