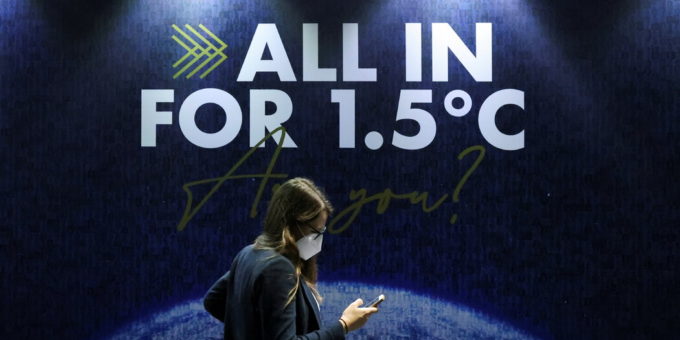 As international climate change talks in Glasgow hurtled toward the closing hours, a new draft agreement released on Friday morning called for a doubling of money to help developing countries cope with climate impacts, and called on nations to strengthen their emissions-cutting targets by next year.

But much of the text in the draft — intended to push negotiators toward a deal that all nations can agree on — remained contentious for many countries. Disputes remain over money, the speed of emissions cuts and indeed whether an agreement should even mention “fossil fuels” — the principal cause of climate change, but a term that has never before appeared in a global climate agreement.

The differences, after nearly two weeks of negotiations, signaled that it would be difficult for negotiators to reach the sort of sweeping agreement that activists and scientists had urged before the start of the United Nations talks, known as COP26. Scientific consensus says that the world must slash greenhouse-gas emissions by nearly half by 2030 in order to stave off the most disastrous effects of global warming. But under countries’ current targets, emissions would continue to rise.

The latest draft text is laced with what, in a diplomatic document, could be described as rage. It “notes with deep regret” that the rich world has not yet delivered the $100 billion annual aid it promised to deliver by last year. It also calls for a doubling of funds by 2025 to help developing countries adapt to the effects of climate change, including extreme weather and rising sea levels.

One of the most divisive questions involves countries of the global north — which have prospered for over a century by burning coal, oil and gas and spewed greenhouse gases into the atmosphere — and whether they should compensate developing countries for the irreparable harms they have caused. The draft proposes a new “technical assistance facility” to help countries with losses and damages, but experts said questions remain on whether the funding should be new and additional.

Still, some experts said the latest draft showed that negotiators were making progress.

“Overall, on balance, this is definitely a stronger and more balanced text than we had two days ago,” said Helen Mountford, vice president of climate and economics at the World Resources Institute.

But with big polluter nations unwilling to phase out fossil fuels fast enough to keep global temperatures from reaching dangerous levels, another dispute is whether they should be required to return with stronger climate targets by the end of next year. The latest draft “requests” that they do so, which is tamer than “urges,” which was used in the previous draft.

There is another major holdup over whether an agreement should include a reference to fossil fuels, the combustion of which is principally responsible for climate change. The draft text released early Friday called on countries to eliminate “inefficient subsidies” for fossil fuels and to accelerate “the phaseout” of coal, the dirtiest fossil fuel. It’s unclear whether that language will stay in the final version, considering that countries like China, India and Poland rely heavily on coal plants.

“Every country, every city, every company, every financial institution must radically, credibly and verifiably reduce their emissions and decarbonize their portfolios starting now,” he told the conference on Thursday.

Some 200 nations represented at the talks must unanimously agree on every word on the final text.

Alok Sharma, president of the negotiations, has insisted that the talks are to close at the “end” of the day on Friday, though that appeared unlikely. The last negotiations, in Madrid in 2019, were scheduled to end on a Friday, but extended into Sunday afternoon.

Activists said that adding the words “inefficient” and “unabated” could help poor countries that want to keep their oil, gas and coal subsidies — but it could also allow big polluting nations to continue underwriting the use of fossil fuels.

“We have sadly seen the hand of fossil fuel interests interfering with that text to water it down with weasel words,” said Catherine Abreu, executive director of Destination Zero, an environmental group.

Caroline Rance of Friends of the Earth Scotland, an environmental group, said: “It looks like the fossil fuel lobby had their hands on the text to weaken it.”

The latest draft, which is intended to push negotiators toward a final agreement, was released after talks went into the wee hours Friday morning. Negotiations are scheduled to end on Friday, but diplomats said the deadline was likely to slip.

GLASGOW — Vanessa Nakate, a climate activist from Uganda, told the United Nations climate summit on Thursday that she and her peers did not believe the pledges that ministers, corporations and banks made this week to move aggressively on climate change.

But they want to.

In one of the most powerful speeches to date before the U.N. climate summit, Ms. Nakate, 24, told diplomats that leaders already are trying to brand the conference, known as COP26, a success, but that she and her peers weren’t buying it.

“Let us be honest,” she said. “We have been here before.”

After a quarter of a century of climate conferences and new annual commitments, planet-warming greenhouse gas emissions continue to rise. “This year will be no different,” Ms. Nakate said.

“We are drowning in promises,” she said.

She called out business leaders and investors, saying they had not taken immediate action but instead were “flying into COP on private jets” and “making fancy speeches.” She also questioned the presence of those in the fossil fuel industry.

“I hope you can appreciate that we may be skeptical when the largest delegation here at the COP26 climate summit does not belong to a country,” she said, “but instead belongs to the fossil fuel industry.”

And she had a message for those bearing promises: “Show us your trustworthiness. Show us your honesty. I am here to say: Prove us wrong.”

Ms. Nakate, a rising star among the world’s climate activists, received sustained applause after her speech. She first drew widespread attention in January 2020 when The Associated Press cropped her out of a picture at the World Economic Forum. She had been standing next to four white activists, including the Swedish activist Greta Thunberg.

The omission shocked and saddened Ms. Nakate, who in a tearful 10-minute video posted on Twitter denounced the “racism” in the global environmental movement and the erasure of Black and African voices. Her response reverberated around the world and solidified her place as a leading voice among young Africans passionately arguing for action against climate change.

Year after year, calls have steadily grown louder for industrialized nations responsible for the greenhouse gas emissions heating up the planet to own up to the problem — and pay for the damage.

But this year, as climate justice has become a rallying cry, the demands for redress have grown louder still, peaking in Glasgow.

As negotiations at the climate summit there close this week, a major point of contention between rich and poor countries is whether the final COP26 document will acknowledge the need for a separate pool of money to address the harm.

The language used to discuss the issue is by intent bland: “loss and damage” are the words carefully chosen. The idea is to avoid assignment of blame for irreparable losses like the disappearance of national territory, culture and ecosystems.

But there is no mistaking the import.

“The term ‘loss and damage’ is a euphemism for terms we’re not allowed to use, which are ‘liability and compensation,’” said Saleemul Huq, a botanist from Bangladesh who has counseled diplomats and activists from the global south on the issue. “‘Reparations’ is even worse.”