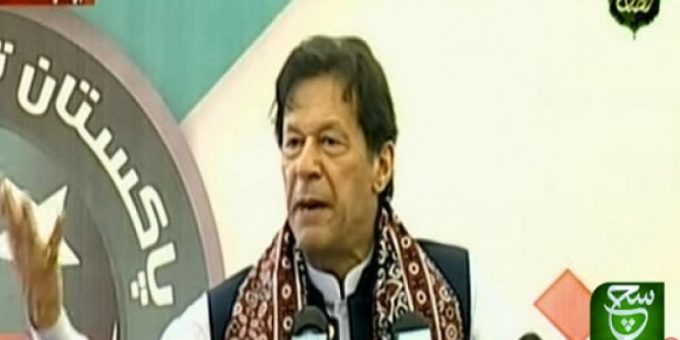 The prime minister was addressing the Kamyab Jawan Programme in Sukkur where he said that instead of progressing with time, villages and rural areas in Sindh were going backwards.

The premier said he had travelled far and wide across Pakistan and had seen several areas where poverty was at large. He added that in Sindh, he had seen a lot of poverty.

The prime minister announced a development package of Rs446bn for the people of Sindh, saying that it had taken considerable difficulty in putting together the funds for the package.

“It will take a month for people to see the changes that our funds bring about for them, on-ground,” he said.

The prime minister said he considered the people of every province, regardless of whether the PTI ruled there or not, as his own people. “We will focus our energies on uplifting the downtrodden people,” he said. “I promise the people of Sindh that I will do everything in my power to bring about a change in your lives,” he added.

The prime minister spoke about the Bundle Island in great detail, saying that no one before had bothered to realise that development there would entail jobs for thousands of people.

He said that by developing the Bundle Island, Pakistan could earn billions in revenue, provide employment to the people of Sindh and also earn foreign exchange reserves.

The premier said it was unfortunate that while the project was good to go, the Sindh government rescinded the no objection certificate it had earlier provided to the federal government to carry out development work there.

PM Imran Khan said his government had told the Sindh government that profit earned from the development on the island would be handed over to Sindh.

He hoped the Sindh government would review its decision and provide the government with the NOC to start work at the island, adding that it would increase the country’s foreign exchange reserves and strengthen Pakistan’s economy.