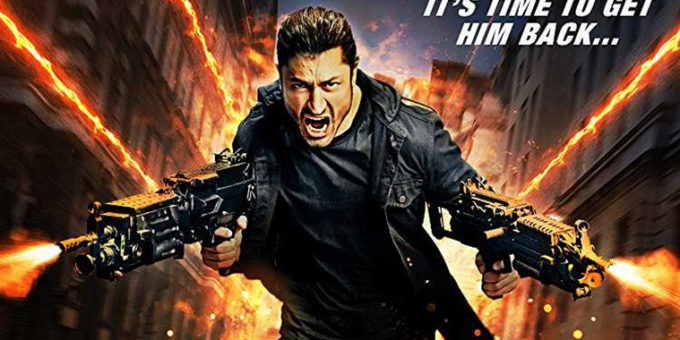 Our valiant commando is back for a third go-round, saving the nation one roundhouse kick at a time. The enemies he is up against are many and varied: a hefty ‘pehelwan’ who harasses school girls (a startling rape-y, distasteful sequence), a bunch of brainwashed, converted Hindus (not their fault, clearly, because the guy who is behind it is responsible), sundry bad guys rattling their sabres. But these are small fry. The big patootie himself is a Muslim hardliner who gets his jollies from forcing his little boy to watch as he digs bloody holes into human bodies with sharp objects.

It is the battle between these two adversaries that makes up the bulk of the proceedings– the pony-tailed doused-in-deshbhakti-commando, Karanveer Dogra (Jammwal), and the hate-speech spewing religious fundamentalist Buraq Ansari (Devaiah) who lives in a posh London house while plotting a worse fate than 9/11 for India.

Like the earlier films, Commando 1 and 2, this one’s USP is action: car and bike chases, people being blown to bits, and lots of space given over to Jammwal doing his thing. His body is a well-oiled, beautifully-muscled machine and we watch in admiration as he goes about his business with efficiency and economy. Dialoguing is not his suit, though: when he speaks, our eyes glaze over.

His team, which consists of a curly-haired pretty thing with a thick south-of-the-vindhyas accent (Sharma reprising her role from the previous outing) and a couple of compatriots in London, get a few scenes to themselves. Commando Karan’s Indian handler (Tailang) barks a few orders and gets to tell a minion: Get Me The Defence Minister, NOW!

But the main act belongs to Jamwal and his adversary (Deviah). The banter between the two has all the seeti-maar dialogues that a film like this can have, in which the good guy, a Hindu (naturally), vanquishes the bad guy, a really bad Muslim (naturally). ‘Osama se buri maut doonga main’, thunders Devaiah. ‘Pehle toh yeh sirf quaum ki ladaai thi, you’ve made it personal’.

And that makes it a perfect fit for a country awash in patently anti-minority sentiments. More than a few times we are told that ‘chand’ (a handful of) bad Muslims give a bad name to the whole caboodle; most of them really are good people. Yeah, right. Commando 3 is just one more iteration of the flavor of the season: terrorism in the time of hyper-nationalism, which is being confused for patriotism.

Though Jamwal does the heroic things, like thumping thugs and rescuing fair maidens, it is Devaiah who steals the show in this patchily plotted, predictable actioner. He sports a spiffy haircut, a passable British accent, and a manic glint to dress up his ‘jehadi’ mastermind. Wish Jammwal had vamped it up, too. His punches land well, but he’s all straight arrow and flat for the most part: thanks be to the go-go-go action, which revs things up a bit.