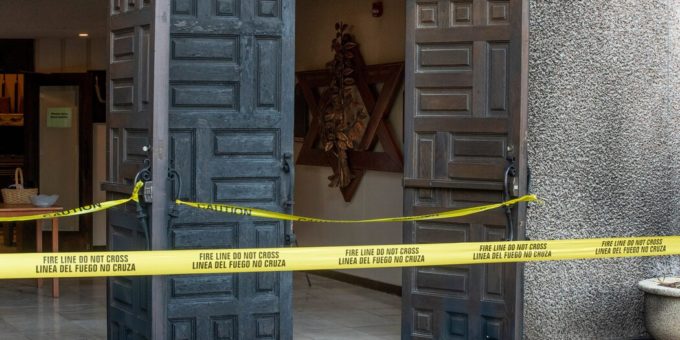 An 18-year-old college student was charged with arson on Monday in an attack on a synagogue in Austin, Texas, on Halloween night that caused extensive damage to the building, the authorities said.

Stickers with Nazi propaganda and swastikas on them were recovered from the student, Franklin Barrett Sechriest, according to an F.B.I. special agent, who said in a criminal complaint that Mr. Sechriest wrote about the arson in a journal that included racial slurs.

The target of the attack, Congregation Beth Israel, a reform synagogue serving about 710 households, estimated that the damage exceeded $150,000.

“I set a synagogue on fire,” Mr. Sechriest, a student at Texas State University in San Marcos, Texas, wrote in the journal, according to the complaint, which included photos of the entries.

Security footage from the night of the attack showed Mr. Sechriest carrying a five-gallon fuel jug and a roll of toilet paper toward the synagogue’s entrance, before disappearing from view of the camera. The F.B.I. special agent, Thomas P. Joy Jr., said footage showed the distinct glow of a fire ignition moments later.

Mr. Sechriest’s face was covered in the video, but investigators said that he had been driving the same black 2021 Jeep Cherokee that had appeared on security camera footage from three nights earlier when he canvassed the synagogue. The vehicle’s license plate was visible in the footage.

Mr. Sechriest was a private in the Texas National Guard before resigning earlier this month, the Guard confirmed in an email on Monday. Richard Lyn Cofer II, a lawyer for Mr. Sechriest, did not immediately respond to phone and email messages on Monday.

The federal authorities did not say whether Mr. Sechriest would be charged with a hate crime in the arson, which was part of a recent series of antisemitic acts in the Austin area.

Rabbi Steven Folberg of Congregation Beth Israel said on Monday that the building’s wooden front doors were charred beyond repair.

“It’s like their home being attacked,” Rabbi Folberg said, adding that the building’s stained glass windows were covered in soot and one had been damaged.

The rabbi said that the arson occurred as the congregation was preparing to host in-person Shabbat services for the first time since the coronavirus pandemic began. Now the building faces a lengthy cleanup.

“The sanctuary is not going to be available to us for some time,” Rabbi Folberg said.

No one was injured in the fire, which the rabbi said might have been worse. He credited a driver with spotting the flames and calling 911, which he said saved the synagogue.

Rabbi Folberg, who has been at Congregation Beth Israel for 30 years, said that he initially wondered if the fire had been a prank because it happened on Halloween. As the details started to emerge from the security camera footage and the F.B.I. report, the rabbi said it became disturbing.

“You start asking all kinds of questions about what’s going on in the life of somebody that would do something like this,” he said.

Texas State University said in a statement that it was helping the investigation.

“Our university decries this hateful act of bigotry and violence and all the antisemitic events perpetrated recently in Austin, San Antonio and San Marcos,” it said. “The Texas State University community stands in solidarity with our Jewish students, faculty, staff, alumni and community members who have been impacted.”

Since the arson, the rabbi said, people from various faiths have rallied around the congregation, contributing more than $100,000 toward the cleanup.

At a rally outside the State Capitol in Austin on Sunday to promote kindness and denounce acts of antisemitism, the rabbi said that an imam from the North Austin Muslim Community Center expressed his solidarity — in more than just words.

“He took an envelope out of his robe and handed me a check that was raised by the mosque,” Rabbi Folberg said.

The imam, Islam Mossaad, said on Monday that the check was for $5,000 but that what it stood for was more significant. He recalled a fire of unknown origin in 2017 that destroyed a mosque that was under construction near Lake Travis, which is outside of Austin.