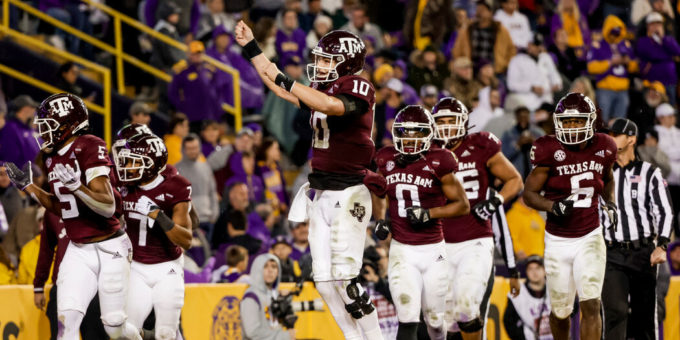 The coronavirus pandemic’s resurgence menaced the college football season’s closing weeks on Wednesday, when one team withdrew from its bowl game and the four national title contenders were warned that they could forfeit if they were not able to compete on time.

Minutes after Texas A&M announced its withdrawal from next week’s Gator Bowl in Jacksonville, Fla., the College Football Playoff said it would not reschedule its Dec. 31 semifinal matchups featuring No. 1 Alabama against No. 4 Cincinnati and No. 2 Michigan playing No. 3 Georgia, even as it detailed a protocol that could upend the tournament before kickoff.

“As we prepare for the playoff, it’s wise and necessary to put into place additional precautions to protect those who will play and coach the games,” Bill Hancock, the playoff’s executive director, said in a statement. “These policies will better protect our students and staffs while providing clarity in the event worst-case scenarios result.”

Under the policies that playoff officials outlined on Wednesday, a team that is unavailable to play in a semifinal game on Dec. 31 will forfeit, allowing its intended opponent to advance automatically to the national title game, which is scheduled for Jan. 10 in Indianapolis.

If both teams in one of the semifinal matchups prove unable to compete, the winner of the other semifinal game will be declared the national champion.

There is a measure of flexibility, though, for the title game itself. Playoff officials said that the championship showdown could be rescheduled by several days, but that it must be played no later than Jan. 14. If a team is unable to compete even after a delay, its opponent will be named the champion; if neither team can appear in Indianapolis, the playoff said, there will be no champion this season.

Playoff officials also said they were shifting plans surrounding their games and would allow teams to arrive just two days in advance of kickoff instead of the traditional five. Related events will be optional for players and coaches, the playoff said, and news conferences will return to the virtual formats that became customary during the 2020 season.

“We certainly wish we were not in this position, but the only responsible thing is to take whatever actions we can reasonably take to better protect those who play and coach the game,” Hancock said.

The playoff teams have not reported significant outbreaks — although Alabama said on Wednesday that its offensive coordinator and offensive line coach had tested positive for the virus.

Texas A&M said its withdrawal from the Gator Bowl came after a surge in cases had left it without enough players. Unless Gator Bowl officials are able to find a replacement team to meet No. 17 Wake Forest, the Dec. 31 game could be the first of this bowl season canceled abruptly because of the pandemic.

“It is unfortunate, but we just don’t have enough scholarship players available to field a team,” Jimbo Fisher, the Texas A&M coach, said in a statement.

The university said that in addition to issues related to the virus, its team’s roster was limited because of injuries unrelated to the pandemic.

Dave Clawson, Wake Forest’s coach, said he hoped bowl organizers would be able to find a substitute team to face his squad, which has a 10-3 record and reached the Atlantic Coast Conference championship game.

“While we are disappointed that we do not have the opportunity to play a talented Texas A&M football team next week in Jacksonville, our student-athletes and staff are still extremely excited and want to play,” Clawson said in a statement. He added: “Our student-athletes, specifically our seniors, deserve this last opportunity to compete as a team for the chance to win a championship.”

At least one other team, Miami, is known to be in health and safety protocols because of virus issues. Miami said this week that it hoped to participate in the Sun Bowl against Washington State on Dec. 31.

The struggles in college sports reflect problems faced more broadly in athletics. The N.H.L. announced a pause to its season and abandoned a plan to send athletes to the Beijing Olympics in February. The N.F.L. and the N.B.A. have largely tried to keep their seasons on schedule, though two N.B.A. games were postponed on Wednesday because two teams, the Nets and the Toronto Raptors, did not have enough players to take the court.