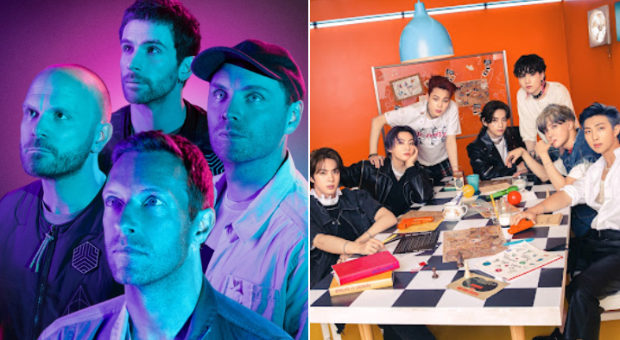 It’s official! The legendary band Coldplay and South Korean juggernaut BTS are collaborating for the very first time. After months of endless speculation and hints, it’s been officially announced that their song is called ‘My Universe.’

Earlier in the day, Alien Radio FM, a website set for Coldplay news, dropped cryptic symbols after which translated into Coldplay x BTS. According to Coldplay fans, the language is derived from the planet Epiphane on the website! The writing at the top of the webpage translates to “Everyone Is An Alien Somewhere,” which can be used as a key to crack the code. RM, SUGA and j-hope are credited on the collaboration. The song is sung both in English and Korean.

For those wondering how the translation was achieved, the language is derived from the planet Epiphane on https://t.co/sJq89R49P1! The writing at the top of the webpage translates to “Everyone Is An Alien Somewhere,” which can be used as a key to crack the code ????‍???? pic.twitter.com/rElWhSmqcg

The official announcement was made later in the day by Coldplay followed by BTS’ official Twitter handle. The song is available for pre-order and it will also have a single CD release. This will contain the single and an instrumental, along with handwritten lyrics by both groups! Interestingly, within one minute of the announcement, the CD has sold out.

Recently, BTS appeared on the special episode of YouTube Originals’ weekly music series “RELEASED” on September 9 leading directly into the premiere of BTS ‘Permission to Dance’ MV (Shorts Challenge ver.) on September 10 at Midnight ET. The band was joined by Coldplay frontman, Chris Martin, for an intimate conversation on what inspired the #PermissiontoDance Challenge on YouTube Shorts and to discuss their shared experience as global musicians. During the conversation, Suga spoke about the positive impact they’ve had on people around the world. “[There is a] gap between who [fans] think I am and who I really am,” he said. “They think I am a good person who can do a lot of things. I was troubled a lot because of that situation but I try very hard to live up to their expectations. I think our team have made very bright and good music both in lyrics and in the message. So in that sense, I am making a lot of effort to live as a good person.”

Talking about the challenge, Jimin said, “Actually, the purpose of this challenge was to give a positive message to people, but we also felt thankful, comforted, and received positive energy while watching people doing the challenge.”

Speaking to PopCrush recently while promoting ‘Higher Power’ single, Chris Martin praised BTS citing, “When it comes to BTS, I just have nothing but love and respect for them. All seven guys, I think they’re just cool, stand for good things and sing about cool things. I love the fact that they are so huge and sing a lot in Korean, they don’t always have to sing in English. I love them a lot and so if the right song came along, I wouldn’t ever say no.”

Back in February 2021, BTS performed Coldplay’s ‘Fix You’ during MTV Unplugged episode. Over the years, the song has been a part of the group in several ways – one might have heard it in one of their videos, in Jimin and Jin’s Spotify playlist, Coldplay being on the collaboration bucket list for V and RM.

So, this has been a long-awaited collaboration and full-circle moment for two legendary groups who have nothing but respect for each other and the craft. It once again proves that there’s no such barrier when it comes to music.

Coldplay is gearing up for their forthcoming ninth studio album Music Of The Spheres, which will be out October 15th, 2021.

SRK: We don’t need guidelines for being true Indians besides those laid down by Tricolour
2020-08-15