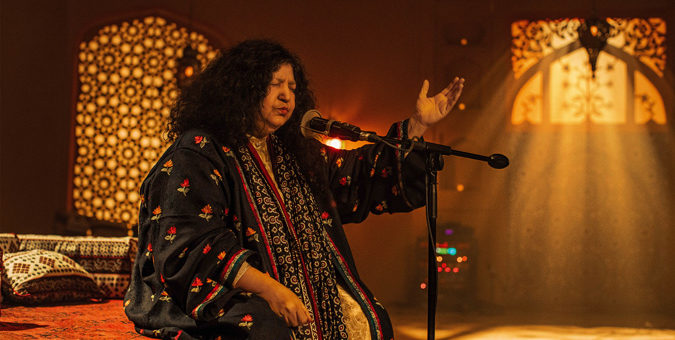 Two years into strange times, vocal powerhouses Abida Parveen and Naseebo Lal are here to confirm what we’ve suspected all along: control is an illusion. In Tu Jhoom, Season Producer Xulfi uses his musical sixth sense to create an atypical pairing so natural it’s borderline insanity it wasn’t done before. “I always like to bring an element of surprise, expected things have short lives,” he said.

Tu Jhoom is a song as hypnotically nostalgic as it is new. Season Producer and Curator Xulfi defines it as the most honest representation of not only his journey, but the Collective’s.

He developed the narrative of the song after realising he needed to own the turmoil within himself, playing the groove on an instrument and humming what would become the chorus on repeat. His mind, like a wheel in motion, needed a day to let the song arrive.

Visually it comes through like a fever dream. It’s hard to say whether Tu Jhoom recalls a painting we once saw of a Mughal scene, or is an actual genetic memory passed down from our elders. Zeeshan Parwez’s video vibrates with warmth, with its floor-to-ceiling jaalis, earthy colours and romantic courtyard filled with bodies submitting to music.

The words, moulded to perfection by Adnan Dhool, are so weighty and wise they feel penned by Abida Ji herself. Word on the street is that when the Grande-Dame was presented the song she started alaaping on the very first line! Naseebo Lal adds a street-wise edge with bold tonality that holds its own, tapping her Rajasthani roots. When she declares she is content, the authenticity in her voice tells us that she has truly lived the message of the song. Hearing the track is like being in on a secret. Both artists have complex personal journeys, and watching them confide in and root for each other feels right.

“Xulfi has made a unique song that epitomizes the Sufi transitional rhythms. I had heard a song that he had worked with Naseebo ji on and told him to work more with her and now we have come together to bring this combined effort.” said Abida Parveen

“I am coming back to Coke Studio for the second time, in a very different style. Abida Ji is an asset not just for Pakistan but the entire world. I am a huge fan of hers and it is an honour to be performing with her.” said Naseebo Lal

Tu Jhoom is more than a song; it’s a declaration. We’re still standing and we’re smiling through it all. Coke Studio throws the gauntlet down with its true-to-soul season opener. The second song from Coke Studio Season 14 will be released on 21st January 2022.