Breaking News
2022-10-01 Philippines martial law: The fight to remember a decade of arrests and torture 2022-10-01 Russia accused of ‘kidnapping’ head of Ukraine nuclear plant 2022-10-01 Public Criticizes Sabeeka Imam on Flaunting Her Body 2022-10-01 Mum’s plea for kidney donor so she does not lose another daughter 2022-10-01 Torstar Corp. co-owner Bitove makes ‘no apologies’ amid tension with business partner 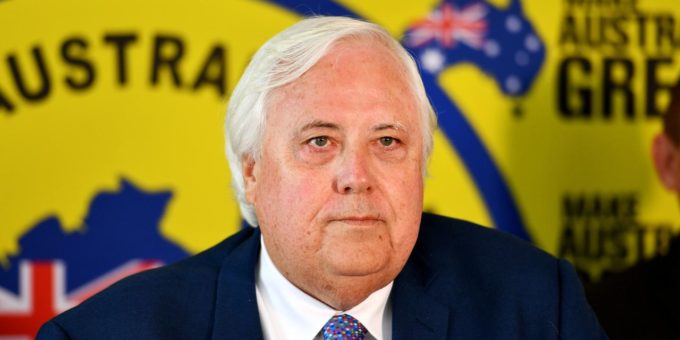 Billionaire Clive Palmer has failed in a last-ditch bid to delay facing court until after state borders open, as a lawsuit looms over his use of the Twisted Sister’s ‘80s classic “We’re Not Gonna Take It” in campaign ads.

The businessman and former politician is being sued by Universal Music, with a hearing due to start in seven days.

But the Federal Court heard on Monday he doesn’t want to give evidence over videoconferencing because he didn’t realise how much of the case was geared towards attacking his credibility.

A judge said in return that “only a fool” would have thought it wasn’t an issue.

Mr Palmer’s barrister Paddy Williams told the court his client “wishes to subject himself to the rigours of cross-examination in person” but the difficulties of travelling interstate in the COVID-19 pandemic mean that isn’t easy.

Mr Williams said Mr Palmer could travel to NSW, but would have to “sit in quarantine for two weeks” on his return to Queensland, an ordeal that would “clearly outweigh” any inconvenience to Universal Music caused by delaying the trial.

“Having somebody closely in front of me as witnesses are on the screen makes it in many respects easier to assess their demeanour, to the extent that demeanour counts for anything these days,” she said.

Patrick Flynn, acting for Universal Music, said it was “hard to believe” how Mr Palmer could have thought the attack on his credibility would be more limited.

He pointed out that documents filed by Universal specifically stated it rejected Mr Palmer’s claim that the music was used for parody or satire.

“No doubt that Mr Palmer’s credibility was in issue from the very beginning and only a fool would have thought otherwise,” Justice Katzmann said.

Mr Flynn said “the whole thing becomes speculative” if you try to predict when this might happen, and that if a case pops up “suddenly the clock is back to zero”.

Justice Katzmann agreed: “One can’t just adjourn to another date because we don’t know what the situation is likely to be or will be in a month, six months, or 12 months from now.”

As soon as Mr Williams finished his reply, Justice Katzmann said: “I’m not persuaded to vacate the hearing or to adjourn any part of it. Do you want me to give reasons?”

“Well then, I’ll give my reasons at some stage tomorrow,” she replied.

Mr Williams then said he had been instructed to appeal the ruling.

“I haven’t even given my reasons!” Justice Katzmann said.

She declined to grant a stay on her decision and told Mr Williams that Mr Palmer can apply for leave to appeal if he still wants to after reading her reasons.

Mr Palmer had offered to pay any associated costs if the trial, or even just his evidence, was delayed, as well as the costs of the application, which he was saddled with regardless.

The trial remains scheduled to begin on October 19.

Originally published as ‘Only a fool’: Judge knocks back Clive

Philippines martial law: The fight to remember a decade of arrests and torture
2022-10-01