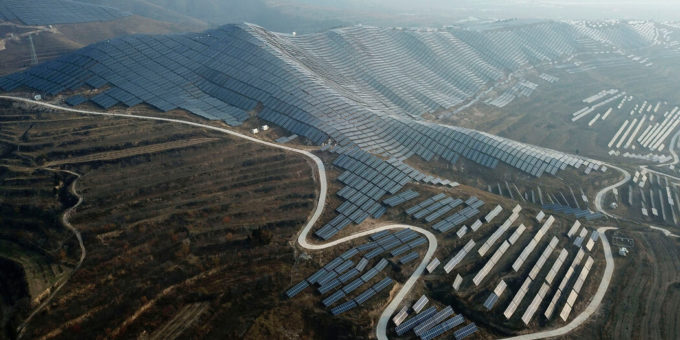 GLASGOW — After two weeks of lofty speeches and bitter negotiations among nearly 200 nations, the question of whether the world will make significant progress to slow global warming still comes down to the actions of a handful of powerful nations that remain at odds over how best to address climate change.

The United Nations global conference on climate change closed Saturday with a hard-fought agreement that calls on countries to return next year with stronger emissions-reduction targets and promises to double the money available to help countries cope with the effects of global warming. It also mentions by name — for the first time in a quarter century of global climate negotiations — the main cause of climate change: fossil fuels.

But it did not succeed in keeping the world from averting the worst effects of climate change. Even if countries fulfill all the emissions promises they have made, they still put the world on a dangerous path toward a planet that will be warmer by some 2.4 degrees Celsius by year 2100, compared to preindustrial times.

That misses by a wide margin the target of limiting warming to 1.5 degrees that scientists say is necessary to avert the worst consequences of warming. And it sets the stage for worsening storms, wildfires, droughts and sea-level rise as well as the social and economic upheaval that would accompany a widening climate crisis.

A relative handful of political leaders around the world — in capital cities such as Washington, Beijing and New Delhi — hold much of the influence over whether those promises are kept and the arc of warming can be sufficiently bent away from disaster. But they face a complex combination of pressures: industry interests that stand in the way of regulations, demands from developing countries for money to help them transition away from fossil fuels, and an increasingly vocal movement among citizens to rein in emissions more quickly and deliver what they call climate justice.

Chief among the leaders facing such pressures is President Biden, who is pursuing one of the biggest climate legislation efforts ever attempted in the United States, but who faces heavy resistance not only from Republicans, but from key senators within his own party.

At the same time, in China, will Xi Jinping — just recently elevated to the pantheon of Communist Party leaders alongside Mao Zedong — be able or willing to corral provincial leaders to reduce their use of the coal that has powered China’s economic rise? Can India’s prime minister, Narendra Modi, whose representatives weakened the final agreement’s language on coal at the 11th hour on Saturday, achieve his pledge of boosting renewable energy sources fivefold by 2030? Will Brazil keep its promise to join other countries in reversing deforestation in the Amazon?

The pledges have kept the goal of limiting warming to 1.5 degrees “within reach — but its pulse is weak,” said Alok Sharma, the British politician who presided over the summit. “And it will only survive if we keep our promises, if we translate commitments into rapid action.”

The test of rapid action includes what his own government does.

Britain, the birthplace of the Industrial Revolution and one of history’s largest emitters of planet-warming greenhouse gases, has said it intends to reduce its emissions by 68 percent by 2030, compared with 1990 levels.

But Britain is also facing criticism for building new roads and airports — both potential sources of carbon dioxide emissions, which are among the main causes of global warming — and for continuing to extract oil and gas in the North Sea. Mikaela Loach, a young Briton who has sued the British government over an oil and gas project there, responded to the summit outcome on Twitter by dubbing it “#CopOut26.”

“We cannot sit & wait for govs to make the right decisions,” she wrote. “WE all must be part of movements. WE have to act to end the fossil fuel era.”

Also this weekend Greta Thunberg, the young climate activist, criticized the United States for its sales of offshore oil leases.

Courts have already begun to weigh in. Citizens in Germany, Pakistan and the Netherlands have sued to force their governments to take stronger action against climate change. In the United States, an environmental law nonprofit has sued the government on behalf of 21 young plaintiffs.

And in the first climate case against a private company, a local Dutch court earlier this year instructed Royal Dutch Shell, one of the world’s largest oil companies, to sharply cut emissions from all of its global operations. The company is appealing the court action.

For businesses, the biggest effect from the Glasgow climate meeting is likely to come from an accord that was announced on the sidelines: A coalition of the world’s biggest investors, banks and insurers that collectively control $130 trillion in assets pledged to use that capital to hit “net zero” emissions targets in their investments by 2050. That push would make limiting climate change a central focus of many major financial decisions.

Success or failure could end up depending significantly on what government regulators come up with, said Simon Stiell, the environment minister from Grenada, a Caribbean island nation that is particularly vulnerable to sea-level rise. “I expect there will be a significant lag between those pledges and it getting to a point where you have carrots and then you have the stick,” he said. “That piece isn’t part of the discussions that took place.”

Beyond that, the consequences of the Glasgow summit for private businesses are less clear. In Europe, many companies have already adjusted their business models for the next decade to align with new European Union laws unveiled this past summer, ahead of the summit, which include high carbon taxes that apply to a widening swath of industries.

Airbus, for example, is developing technology for hydrogen fueled planes. Europe’s auto industry is doubling down on shifting to electric vehicles, even if many carmakers did not join a pledge struck in Glasgow to phase out gasoline car sales. Luxembourg-based ArcelorMittal, the largest steel maker outside of China, says it aims to reduce the company’s “carbon emissions intensity” in Europe by 35 percent by 2030. That is partly driven by high carbon taxes.

Oil and gas companies, though, are nowhere near retreating from their core businesses even though it is the burning of fossil fuels that creates the carbon dioxide that is warming the world. The leaders of these companies say that they need their fossil fuel revenues to fund alternative energy investments — particularly at a time when oil and gas prices are enormously high. “We are a cash machine at these types of prices,” said Bernard Looney, chief executive of BP, on a call with analysts this month.

European and American oil and gas companies could potentially gain from one contentious paragraph in the summit document. It calls for a “phasing down” of coal but says nothing about reducing oil and gas production. As coal declines, producers of liquefied natural gas, a competitor to coal in electricity generation, stand to gain new markets.

A number of the promises made in Glasgow could pose a test for a broad swath of industries. For instance, a landmark deal to reduce deforestation by half by 2030 would inevitably affect a range of companies that use products linked to deforestation, such as palm oil and wood. “Almost every sector of our economy is part of the crime of deforestation,” said Mindy Lubber, who heads Ceres, a nonprofit that works with companies and investors to address their environmental effects.

Some scientists saw the results of the Glasgow summit as a call to further scientific action.

Maisa Rojas, a climate modeler at the University of Chile, said researchers need to better quantify the effects of climate change on vulnerable people and communities. That will help address an issue that was one of the most bitterly argued at Glasgow — “loss and damage,” or the question of what is owed to people who have barely contributed to global warming but are most harmed by it.

“We need a systematic understanding and monitoring of what is going on,” said Dr. Rojas, who is the director of the university’s Center for Climate and Resilience Research.

Indeed, one of the most important issues that at-risk countries like Grenada plan to press in the coming months is financing for loss and damage. These nations did not win their battle in Glasgow, instead getting only a commitment from rich countries to have a “dialogue” on the compensation issue in the future.

Mr. Stiell argued that simply offering disaster relief, as some countries including the United States have suggested, is insufficient. Loss and damage funding is also required for the slow attrition of land due to sea-level rise and for agricultural losses from long running droughts. “There needs to be outcomes beyond a dialogue,” he said.

Many of the youth activists who protested outside the talks said the promises didn’t go nearly far enough to address a problem that they are already living with. Mitzi Jonelle Tan, an activist from the Philippines who joined tens of thousands of activists on the streets of Glasgow to rally for “climate justice,” said the outcome felt like “a stab in the back from those who call themselves leaders.”

“But the youth climate movement will keep fighting,” she said, “even when we are angry, sad, or afraid, because this is everything to our generation.”