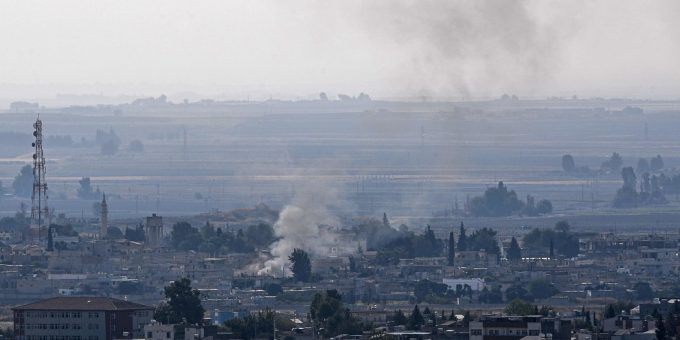 ISTANBUL — Sporadic fighting continued in northern Syria on Friday, casting uncertainty over an American-brokered truce, as conflicting reports emerged about whether Kurdish forces were retreating or hunkering down and whether Turkish troops were advancing or holding fire.

Clashes continued on and off in the vicinity of a strategic Syrian border town, despite President Trump hailing the cease-fire, announced on Thursday night by Vice President Mike Pence, as “an incredible outcome.”

Mr. Pence had promised that fighting would halt for five days to allow Syrian Kurdish forces to evacuate a central pocket of northern Syria that Turkey wants to wrest from Kurdish control.

But though fighting eased, gunfire could still be heard in the area of Ras al-Ain, a town next to the Turkish-Syrian border, during the early morning and early afternoon. By nightfall the Kurdish military leadership said its forces remained in a “defensive position” in the places they had been deployed when the cease-fire was agreed — contradicting Turkish and American claims that they had started to retreat, as required by the terms of the deal.

Most international news organizations were absent from the battlefield, leaving a dearth of independent information about the situation, which everyone from the lowliest militiaman to the most senior politician had an interest in interpreting to their favor.

Around midday, President Recep Tayyip Erdogan of Turkey denied any fighting had taken place, hours after the Kurdish leadership said it was being shelled by Turkish forces. Then Mr. Trump tweeted that Mr. Erdogan had conceded by phone that there had been, briefly, “minor” sniper and mortar fire.

What was clear by nightfall was that the cease-fire’s desired outcome — a complete cessation of hostilities and the withdrawal of Kurdish troops from part of northern Syria — had not yet fully taken place.

Should Kurdish forces remain in position by Tuesday night, Turkey has pledged to renew its full-scale assault, which began on Oct. 9.

“If the United States can keep its promise, in 120 hours the issue of the safe zone will be resolved,” Mr. Erdogan told reporters at a news briefing in Istanbul. “If not, the operation will continue where we left off.”

The stuttering nature of the cease-fire raised further concerns about the United States’ waning influence on the outcome of Syria’s eight-year civil war.

These fears were compounded on Friday when Mr. Erdogan issued a menacing response to a private letter sent by Mr. Trump to the Turkish president on the day the invasion began.

“Don’t be a tough guy,” Mr. Trump had written, in a letter characterized by informal language rarely seen in diplomatic communications.

Mr. Erdogan responded publicly to the letter for the first time on Friday, saying that his country “cannot forget” the harshly worded communiqué, since it was “not in harmony with political and diplomatic niceties.”

“We also want it to be known that, when the time comes, the necessary response will be taken,” Mr. Erdogan said. However, he also noted that the issue was not a current priority for Turkey.

The Turkish government defines the Kurdish militia that controls most of northern Syria as a terrorist group, and Mr. Erdogan hailed the planned withdrawal as a victory over it. He also said that Turkey would establish 12 observation points in a 20-mile deep buffer zone along a 250-mile stretch of the border east of the Euphrates River.

American troops would remain in southeastern Syria and would maintain control of the airspace of the entire northeastern zone, said Ibrahim Kalin, a spokesman for the Turkish president.

Responding to the claims that Turkey had violated the truce, Mr. Erdogan told a reporter after leaving Friday prayers at a mosque in Istanbul: “I do not know where you get your information from. Conflict is out of the question.”

But Mr. Trump posted on Twitter Friday afternoon that Mr. Erdogan had told him in a phone call that “there was minor sniper and mortar fire that was quickly eliminated.”

Nevertheless, Mr. Trump dismissed concerns about the viability of the cease-fire. “There is good will on both sides & a really good chance for success,” he said.

Mr. Trump also said that some European states were now prepared to take back European citizens from the Islamic State who are currently incarcerated in Kurdish prisons, allaying concerns that they might be released during the fighting.

“This is good news, but should have been done after WE captured them,” Mr. Trump tweeted. “Anyway, big progress being made!!!!”

Gunfire continued to be heard in Ras al-Ain midafternoon by members of a civilian convoy attempting to reach the city, according to Robin Fleming, an American researcher traveling with the convoy.

Watching the town from a nearby hilltop shortly before 1 p.m., Ms. Fleming said she could see smoke rising from the town and hear gunshots, but no artillery.

The convoy ultimately turned back before reaching the town because of fears of attack by Turkish-led Arab militias.

Turkish-led forces also prevented a convoy of international aid workers from gaining access to Ras al-Ain to treat people wounded in the fighting, according to the Syrian Observatory for Human Rights, an independent war monitor based in Britain.

Ras al-Ain has been the site of the fiercest clashes since Turkish troops invaded Kurdish-held areas of northern Syria early last week.

On Friday, Kurdish health officials said they were investigating whether six civilians in the town had been hit by chemical weapons during Turkish airstrikes. Photographs shared by the Kurdish Red Crescent, a medical charity working in the area, showed at least two children with burns on their faces.

Mr. Erdogan denied the claim and said the Turkish Army had no chemical weapons in its inventory. He accused the main Syrian Kurdish militia, the Y.P.G., of sowing disinformation also about civilian casualties and accusation of war crimes committed by Turkish-backed Syrian forces.

But Amnesty International, a global rights watchdog, accused the Turkish military and Arab militias fighting under its command of carrying out “serious violations and war crimes, including summary killings and unlawful attacks that have killed and injured civilians.”

At least 218 civilians in northern Syria have died since the invasion began, according to the Kurdish authorities. A further 20 have been killed in Turkey by Kurdish mortar attacks, Mr. Erdogan said.

Turkey wants to force out the Syrian Kurdish militia that has used the chaos of the conflict to establish an autonomous region across roughly a quarter of Syrian territory. The militia is an offshoot of a guerrilla group that has waged a decades-long insurgency in Turkey. The Turks view the group as a terrorist organization.

Since 2014, the group had operated under the protection of the United States military, which partnered with the Kurdish fighters to help sweep the Islamic State from the region and, in the process, allowed the Kurdish militia to control most of the land lining the Turkish-Syrian border.

But after Mr. Trump abruptly ordered the withdrawal of United States troops from the border this month, ending their protection of the Kurdish fighters, Turkish forces invaded with the aim of establishing a Turkish-friendly zone, roughly 20 miles deep, along the border.

By Friday, the Turkish troops had captured around 850 square miles of Syrian territory, Mr. Erdogan said in his speech.

The deal announced on Thursday by Mr. Pence and Mr. Pompeo effectively gave American assent to Turkish territorial ambitions in part of the area, handing Turkey a huge diplomatic victory and completing the sudden reversal of a central plank of American policy in the Middle East.

It was sealed without the involvement of the Syrian or Russian governments, to whom the Kurdish authorities turned for protection after the American evacuation and the onslaught of Turkish-led forces.

On Friday, Mr. Erdogan said he would discuss the future of the rest of northeastern Syria with Vladimir V. Putin of Russia at a meeting in Sochi on Tuesday.

“Our aim is to reach a reconciliation with Russia about those matters that are reasonable and acceptable to everyone,” Mr. Erdogan said.

Abominable: A DreamWorks movie, a map, and a huge regional row

Hrithik Roshan extends his support to a foundation and donates masks to frontline warriors : Bollywood News
2021-06-13

How Diabetics Can Lower The Risk Of Being Infected By COVID-19; Expert Suggests Diet Tips
2020-11-14