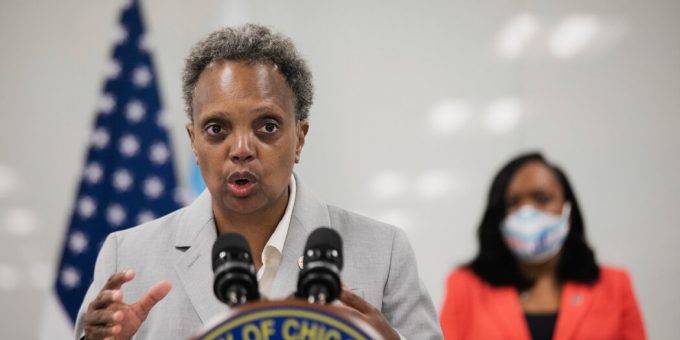 It’s not just cities led by Democrats that are struggling. In Jacksonville, Fla., where the Republican National Convention will be held next month, the city’s Republican mayor, Lenny Curry, said at a news conference on Tuesday that there was no need for federal law enforcement to help calm violent protests in his city because local police had been more aggressive. Still, the city is facing one of its deadliest years in decades, with more than 100 homicides as of Monday, according to the Jacksonville Sheriff’s Office.

In Philadelphia, Mayor Jim Kenney said he opposed any federal intervention in response to the protests. And Larry Krasner, the city’s progressive district attorney, said in a statement on Monday that he would prosecute anyone, including federal agents, who broke the law by assaulting or kidnapping people.

Ms. Lightfoot said that she did not expect a Portland-style deployment in Chicago. Still, she cautioned residents that if the situation changed and they saw anything similar to Portland, they should call her office or 911.

In Oakland, Mayor Libby Schaaf, a Democrat, has accused Mr. Trump of trying to distract people from the abysmal job the federal government has done in containing the coronavirus.

“I don’t need law enforcement in Oakland,” Ms. Schaaf said. “I need testing, I need personal protective equipment, we need direct income support for people who are out of work, that’s what we need. This president seems to confuse a political bent — obviously Oakland is a proud diverse, progressive city, and that is not a mess, nor is it hell.”

Yet, regular cooperation has not always worked.

In Chicago this year, the police have already confiscated 5,296 guns, Ms. Lightfoot said. Still, she said, the A.T.F. is too constrained by the gun lobby to tackle serious problems like guns pouring into Chicago from Arkansas, Indiana and elsewhere.