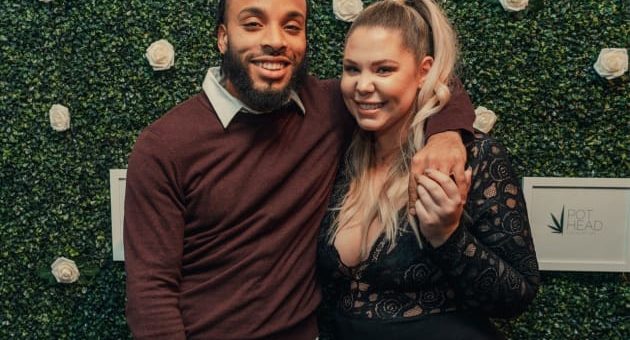 Kailyn Lowry has been unusually secretive about her private life in recent weeks, but there are some things we know for sure:


For example, Kail is currently pregnant with her fourth baby.


We also know that the baby is Chris Lopez’s.


And we know that the situation is more than a little strained these days, as Lowry was granted a restraining order against Lopez in October.


The incident that led to the restraining order reportedly happened right around the time Kail got pregnant with Chris’ kid.


After all that, you might think there’s no way that Kail and Chris could possibly be in a relationship.


But you have to consider the fact that she’s forgiven him for a lot in the past.


And she might draw the line right around here:


This pic appeared on a Teen Mom-themed Instagram page this week, and the poster offered some potentially scandalous information


“CHRIS BACK WIT ONE OF HIS OLD HOES FROM [high school],” the amateur sleuth reports.


“I SAW THEM OUT AND TRUST AND TRUST ME I KNOW WAT IM TALKIN BOUT,” she adds.


An intriguing development, to say the least.


This modern-day Sherlock Holmes kept the identity of Chris’ gal pal a secret, but there’s a lot we can infer based on the pic and her caption.


We’re assuming this is an “OLD HOE” in the sense that it’s a “HOE” that Chris was involved with in his high school days, not one who’s elderly.


The photo doesn’t serve as conclusive evidence that the two of them were together recently, and not only because of the scribbled-out face.


Based on the fact that Chris appears to be wearing a mortarboard, we’re guessing this is a graduation photo.


Still, the unlicensed private eye who posted this pic insists that Chris has been spotted about town with a young harlot by his side.


And that might be enough to convince Kail that it’s time to hand the man his walking papers.


Like we said, it’s hard to tell what’s going on with these two.


Last year, there were signs that Lopez got another woman pregnant while he was dating Lowry.


And Kail got pregnant by him a second time after those reports came out.


Perhaps when it comes to the amount of mistreatment that she’ll put up with from Chris, Kail’s capacity for abuse can best be summed up by the Lindsay Lohan quote from the climactic math competition in Mean Girls.


Say it with us — the limit does not exist!


That’s the only high school throwback we need, thank you very much!