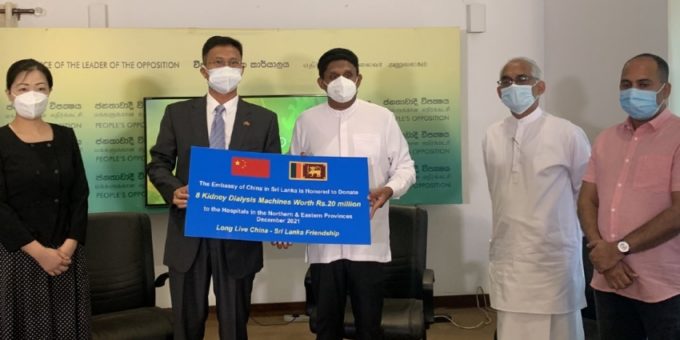 COLOMBO (News 1st); The Chinese Embassy had handed over a donation of eight Kidney Dialysis Machines worth Rs. 20 million to hospitals in the Northern and Eastern Provinces.

The Chinese Embassy stated that the donation was done at the request of the Opposition Leader Sajith Premadasa.

Opposition Leader Premadasa had later expressed his gratitude to the Chinese envoys, stating that he is thankful for the Embassy’s support towards SJB’s vision of ensuring critical life saving equipment in all Sri Lankan hospitals.

Accordingly, the Government of China today provided financial assistance of Rs. 11.9 million for the Kidney Dialysis Machine which is essential for testing for kidney related diseases.

The Chinese delegation said that the donation was not entirely a loan.

Subsequently, during the discussions with China regarding the assistance, the Leader of the Opposition Sajith Premadasa repeatedly urged China to make donations instead of loans.

Ambassador Qi Zhenhong today (22 Dec) handed over a donation of 8 lifesaving Kidney Dialysis Machines worth of Rs. 20 million to needy hospitals in the Northern and Eastern Provinces, upon a request by Hon. @sajithpremadasa Leader of the Opposition –@ParliamentLK #CNLK65 🇨🇳🇱🇰 pic.twitter.com/B9czP6XE91

What Is the Crypto Bill All About? CoinSwitch Compliance Officer Explains

William Barr Testimony: Plans to ‘Accommodate’ Requests for More From the Mueller Report
2019-04-10