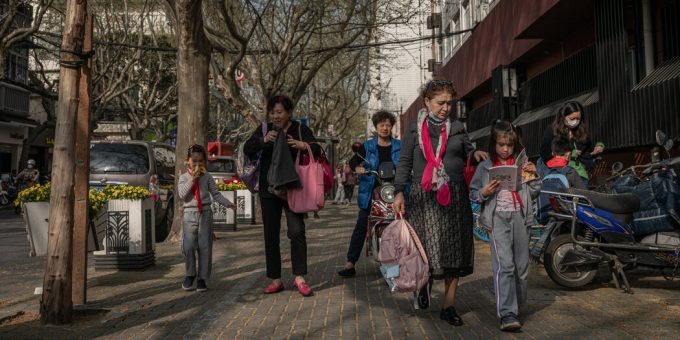 China’s population is growing at its slowest pace in decades, with a plunge in births and a graying work force presenting the Communist Party with one of its gravest social and economic challenges.

Figures for a census conducted last year and released on Tuesday showed the country’s population at 1.41 billion people, about 72 million more than those counted in 2010. This was the narrowest increase recorded since the Communist Party conducted its first census, in 1953.

Only 12 million babies were born in China last year, according to Ning Jizhe, the head of China’s National Bureau of Statistics, the fourth year in a row that births have fallen in the country. That makes it the lowest official number of births since 1961, when a widespread famine caused by Communist Party policies killed millions of people, and only 11.8 million babies were born.

The figures show that China faces a demographic crisis that could stunt growth in the world’s second-largest economy. China faces aging-related challenges similar to that of developed countries, but its households live on much lower incomes on average than the United States and elsewhere.

In other words, the country is growing old without first having grown rich.

“Aging has become a basic national condition of China for a period of time to come,” Mr. Ning said at a news conference announcing the results of the census.

China’s population woes could compel Xi Jinping, the country’s top leader, to reckon with the failings of the ruling Communist Party’s family planning policy, which for decades was one of the country’s biggest sources of public discontent. If the trend continues unabated, it risks complicating Mr. Xi’s “Chinese dream,” a pledge of long-term economic prosperity and national rejuvenation on which he has staked his legacy.

Beijing is now under greater pressure to abandon its family planning policies, which are among the world’s most intrusive; overhaul an economic model that has long relied on a huge population and a growing pool of workers; and plug yawning gaps in health care and pensions.

“China is facing a unique demographic challenge that is the most urgent and severe in the world,” said Liang Jianzhang, a research professor of applied economics at Peking University and a demography expert. “This is a long-term time bomb.”

The new population figure puts the average annual growth rate at 0.53 percent over the past decade, down from 0.57 percent from 2000 to 2010. This puts China on course to be surpassed by India as the world’s most populous nation in the coming years.

Demographers say there are no easy fixes. A growing cohort of educated Chinese women are delaying marriages, which have declined since 2014. China is not willing to rely on immigration to boost its population. The divorce rate has risen consistently since 2003. Many millennials are put off by the cost of raising children.

In the southwestern city of Chengdu, Tracy Wang teaches English to children at a center she founded, but said she did not want any of her own.

“Before, many people used to think it was such an incredulous thought: ‘How could you even think this way?’” she said. “But now, they all understand that you can’t afford it.”

The data released on Tuesday pointed to the impact of such concerns. China’s total fertility rate — an estimate of the number of children born over a woman’s lifetime — now stands at only 1.3, according to Mr. Ning, the senior official, well below the replacement rate of 2.1.

Mr. Ning said births last year were lower in part because of the uncertainty caused by the pandemic. He acknowledged that government policies affected fertility but said that improved living standards and changing social attitudes were playing an increasingly important role, as they have elsewhere.

“Low fertility has become a common problem faced by most developed countries, and it will also become a practical problem facing our country,” Mr. Ning said.

The population is also aging rapidly. People over the age of 65 now account for 13.5 percent of the population, the census showed, up from 8.9 percent in 2010.

When it was younger, that population was one of China’s greatest strengths.

For decades, China relied on an endless stream of young workers willing to toil for low wages to fuel its economic growth. Today, labor costs are rising, in part because of a shortage of workers. Factory owners in the southern city of Guangzhou are lining up in the streets, asking employees to choose them. Some companies have turned to robots because they cannot find enough workers.

While most developed countries in the West and Asia are also getting older, China’s demographic problems are largely self-inflicted. China imposed a one-child policy in 1980 to tamp down population growth. Local officials enforced it with sometimes draconian measures. It may have prevented 400 million births, according to the government, but it also shrank the number of women of childbearing age.

As the population gets older, it will impose tremendous pressure on the country’s overwhelmed hospitals and underfunded pension system. China also continues to grapple with a huge surplus of single men that has driven problems such as bride trafficking, an unintended consequence of its family planning rules.

These trends are proving difficult to reverse. Three decades after the one-child policy was introduced, attitudes about family sizes have shifted, with many Chinese now preferring to have only one child.

Wang Feng, a professor of sociology at the University of California, Irvine, likened China’s birth control policy to a mortgage that the government has taken out on its future.

“The census results will confirm that the payback time is now,” Professor Wang, an expert on China’s demographic trends, said ahead of the release of the results. “Demography will constrain many of China’s ambitious undertakings.”

The census could prompt policymakers to further loosen family planning restrictions, which since 2016 have been eased to limit couples to two children. Already, many local governments are allowing families to have three children or more without making them pay fines.

In the decades to come, Beijing will face the difficult task of maintaining strong economic growth — and staying globally competitive — as the labor pool shrinks.

“China’s economy might not in the foreseeable future overtake that of the U.S. as the largest economy,” said Julian Evans-Pritchard, a senior China economist at Capital Economics, a research firm. “And the key reason for that is demographic differences.”

China is also maturing far more quickly than most countries, a rate that is rapidly outpacing the government’s meager investments in health care and social services catering to an older population. A central challenge for Beijing is how to help the country’s younger generation care for the swelling ranks of retirees. People under the age of 14 made up 18 percent of the population, up only slightly from 17 percent 10 years ago.

The government wants to raise the retirement age, among the world’s lowest at 60 for men and 50 for most women, to ease pressure on the underfunded pension system. China’s main state pension fund, which relies on tax revenues from its work force, risks running out of money by 2036 if policies remain unchanged, according to research commissioned by the party.

But having people work longer creates its own set of problems, and opposition to delaying retirement has been widespread. Many young Chinese adults worry such a move would make it harder for them to find jobs, and those with children fear they would not be able to rely on their parents for child care should they be unable to retire. Some older adults worry that it would be hard for them to find or hold on to jobs in a society where younger workers are often preferred.

Australian boy, 13, crushed by bin lorry after sleeping in bin

Humpback Whale Nearly Eats a Lobsterman, Then Thinks Better of It
2021-06-12