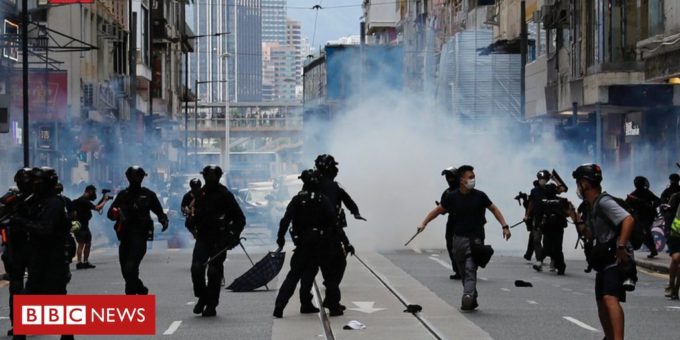 The UK will “bear the consequences” if it continues to go “down the wrong road” on Hong Kong, China has warned.

On Monday, the UK suspended its extradition treaty with Hong Kong over a new security law for the ex-colony, which gives Beijing more power.

In response, the Chinese ambassador in London said the UK had “blatantly interfered” in China’s affairs.

Liu Xiaoming said: “China has never interfered in UK’s internal affairs. The UK should do the same to China.”

Earlier this month, Prime Minister Boris Johnson pledged to offer three million Hong Kong residents the chance to settle in the UK, allowing them to ultimately apply for British citizenship.

The moves came after Beijing introduced the controversial new security law at the end of June, creating offences that could see Hong Kong residents sent to mainland China for trial.

Critics have claimed the law could see pro-democracy protesters in the region being served with life sentences.

Tensions between London and Beijing have been rising, with the UK government separately announcing it would require the removal of Chinese technology from the UK’s fledgling 5G mobile network.

Meanwhile, US Secretary of State Mike Pompeo arrived in London on Monday evening ahead of talks with the PM on issues including China and the coronavirus pandemic.

According to its opponents, the new security legislation breaches an agreement made with the UK before Hong Kong – a former British colony – was handed over to China in 1997.

Under a 50-year agreement, China enshrined civil liberties – including the right to protest, freedom of speech and the independence of the judiciary – in Hong Kong’s Basic Law, an approach which came to be known as “one country, two systems”.

Foreign Secretary Dominic Raab announced the suspension of the UK’s extradition treaty with Hong Kong on Monday, saying there was “uncertainty” about how the new security law would be enforced.

“I would just say this: the UK is watching and the whole world is watching,” he said.

The decision means that if someone in the UK is suspected of a crime in Hong Kong, they will not automatically be handed over by British authorities to face justice there.

Ambassador Liu said in a tweet that the UK had “contravened international law and the basic norms governing international relations” with the move.

And a statement published on the Chinese Embassy’s website said: “China urges the UK side to immediately stop interfering in Hong Kong affairs, which are China’s internal affairs, in any form.

“The UK will bear the consequences if it insists on going down the wrong road.”

Mr Raab on Sunday accused China of “gross and egregious” human rights abuses against a minority group known as the Uighurs, and said sanctions against those responsible cannot be ruled out.

The Uighurs are mostly Muslims and see themselves as culturally and ethnically close to Central Asian nations, and their language is similar to Turkish. The majority live in Xinjiang, western China, where they number about 11 million people.

It is believed that the Chinese government has detained up to a million Uighurs over the past few years in what the state defines as “re-education camps”. The government is now also accused of a programme of forced sterilisation against Uighur women.

China initially denied the existence of the camps, before claiming they were a necessary measure against separatist violence in Xinjiang. It also denies carrying out forced sterilisations.

But Ambassador Xiaoming denied abuses were taking place and said talk of a concentration camp was “fake” after being confronted with drone footage appearing to show Uighurs being blindfolded and led to trains.

Last week, the UK government announced it would require the removal of technology manufactured by Chinese company Huawei from the country’s fledgling 5G mobile network.

That decision followed sanctions imposed by Washington after claims the firm poses a national security threat due to its links with China – something Huawei has denied.

Mawla the ‘Destroyer’, brutal new head of IS group

“Danger Of Terror From Afghanistan Spreading To Kashmir”: Russian Envoy
2021-09-07

Weight Loss Foods: 7 Essential Nutrients You Must Add To Your Weight Loss Diet
2021-09-10