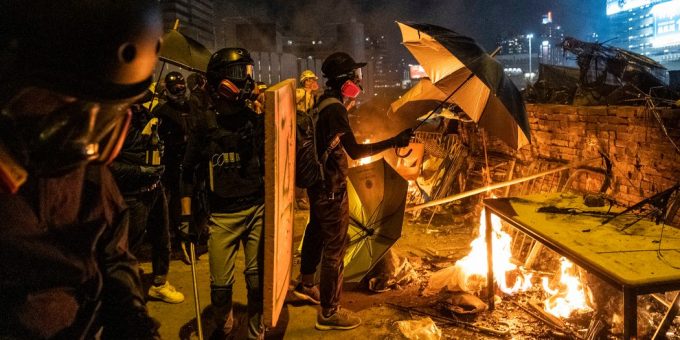 SHANGHAI — China vented on Thursday after President Trump signed new human rights legislation covering the protest-wracked city of Hong Kong. It denounced the new law as illegal interference in its own affairs. It summoned the American ambassador for the second time in a week. It vowed retaliation.

Behind the harsh rhetoric, China has few options for striking back at the United States in a meaningful way. And it has bigger priorities — namely, ending the increasingly punishing trade war between the two countries. Though both sides are talking about their willingness to reach a deal, they have yet to sign even an interim pact that would head off potentially damaging new tariffs less than three weeks from now.

On Thursday, Beijing’s main agency on trade remained quiet on the legislation even as other officials railed against it, suggesting that the government remained open to a trade deal and would let the volatile issue of Hong Kong simmer, at least for now.

“Beijing will make a lot of noises but they can’t afford to do much,” said Steve Tsang, director of the SOAS China Institute in London, a research center. “The trade deal is so important to the Chinese that they won’t let anything upset it.”

On the face of it, President Trump’s signature on two bills looks like a direct brushback against Beijing’s rule over Hong Kong. The former British colony operates under its own laws but has come increasingly under the sway of Beijing, one reason behind the increasingly violent protests that have troubled the Chinese territory for five months.

The first bill authorizes the American government to impose sanctions on Chinese or Hong Kong officials responsible for human rights abuses there. The second bill bans the sale of American-made tear gas, rubber bullets or other crowd-control equipment to the Hong Kong authorities.

China’s reaction was immediate but unspecific. It summoned Terry Branstad, the American ambassador to China, to complain about the Hong Kong legislation, after doing the same thing just three days ago. Hu Xijin, the well-connected editor of the nationalistic Global Times tabloid, said China could retaliate by banning the legislation’s drafters from China and Hong Kong, a move that would be symbolic at best.

At a daily news conference in Beijing on Thursday, Geng Shuang, a spokesman for China’s Foreign Ministry, said Beijing may take unspecified countermeasures. “This so-called act will only make the broad Chinese people, including their compatriots in Hong Kong, more aware of the sinister intentions and hegemonic nature of the U.S.,” he said, adding that “the plot of the U.S. side is doomed to failure.”

Still, asked about trade, Mr. Geng said only that the United States should not implement the law “so as to not affect China-U.S. relations.” And at its weekly news conference on Thursday, China’s Commerce Ministry — the arm of the Chinese government directly involved in trade talks — did not mention the American legislation.

The Trump administration has sent its own signals that it does not want the Hong Kong legislation to derail trade talks. Mr. Trump signed the bills in private, outside the presence of lawmakers, photographers and television crews. He also said, without offering specifics, that some of the provisions might infringe on the constitutional prerogatives of the presidency to oversee foreign policy, suggesting he may not implement them.

While the Chinese government sees the unrest in Hong Kong as a test of its strength and authority, it has reasons to put the economy first.

The trade war has contributed to an economic slowdown that has sent growth to its most sluggish pace in nearly three decades. Economic indicators in recent weeks suggest the slowdown has continued, if not worsened. The Communist Party governs with undisputed power in China based on a promise of a better life, so a slowdown could present a direct challenge to its rule.

At the same time, China has come to realize in recent weeks that it needs massive imports of meat to offset an epidemic that has killed half or more of the country’s pigs. The United States is the world’s second-largest producer of pork after China, the second-largest soybean producer for animal feed after Brazil and the largest beef producer.

China and the United States are far from ending their trade war. But both sides are trying to reach a stopgap pact, called the Phase 1 trade agreement. Reaching a deal could forestall another round of American tariffs set to go into effect on Dec. 15 on even more Chinese imports, including consumer goods like smartphones and laptops.

Chinese negotiators “feel that they’re getting enough out of the trade talks not to let other issues, like North Korea and other questions, get in the way,” said James Green, who was the top trade official at the United States Embassy in Beijing until last year and is now a senior associate at McLarty Associates, a Washington consulting firm.

China has let similar affronts pass without meaningful retaliation in recent months as it tries to seek a deal. For example, Chinese officials continued to negotiate after the Canadian authorities at the behest of Washington last year arrested a top executive of Huawei, the Chinese telecommunications giant. Negotiations continued also after the United States put more than two dozen Chinese companies and organizations on a blacklist over human rights concerns.

Beijing could take a similar approach to Hong Kong, where its problems would be difficult to solve quickly in any case.

Large-scale protests began in Hong Kong in June over a bill that would have allowed the extradition of Hong Kong residents and visitors to the opaque and often harsh judicial system in mainland China. While that Hong Kong government bill was finally withdrawn this autumn, protesters have broadened their goals to include the introduction of universal suffrage and a general amnesty for several thousand demonstrators who have been arrested at protests.

The unrest led to a major setback for Beijing on Sunday, when Hong Kong residents voted overwhelmingly in favor of antigovernment candidates in elections for neighborhood councils. The results signaled broad discontent with the territory’s Beijing-aligned leaders and undermined a Communist Party narrative that a silent majority in Hong Kong opposed the protests but dared not speak out.

Despite the setback, Beijing may now have the freedom to play the long game with Hong Kong. Tensions have eased and street violence has subsided considerably since the vote. Sunday’s elections were held with minimal disruptions.

Even before the vote, Hong Kong’s stock market had begun to climb again, even though the territory’s economy has fallen into a recession for the first time in a decade. On Tuesday, Alibaba, the Chinese e-commerce giant, raised billions of dollars through a share sale in Hong Kong, suggesting that the city remains a crucial financial center for Chinese companies.

That could give Beijing room to see what its opponents do next. In particular, the winners of Sunday’s vote will now have to show that they can meet the needs of their constituents. The more than 250 pro-democracy candidates who won local office for the first time last Sunday will have to deal with countless tiny community management issues, from the location of bus stops to complaints over air-conditioners that drip too much. Most of the city’s new district councilors, many of them in their 20s, campaigned on democracy issues instead of less glamorous community service.

“I just hope the radicals in the democratic camp haven’t bitten off more than they can chew,” said Leung Chun-ying, a former chief executive of Hong Kong who is now a top adviser to Beijing’s leadership.

Hong Kong’s core issues are unlikely to be solved anytime soon. They could extend past the American elections next year, when Chinese negotiators may face a new American president.

While Beijing may wait for now, the challenges presented by the American legislation are not likely to be forgotten. Mr. Trump’s signing of the bill could intensify fears within the Communist Party that its influence is waning in the territory and provoke additional efforts to tighten control.

Mr. Xi’s government said last month that it would roll out new steps to “safeguard national security” in Hong Kong, though it has not offered specifics.

“The central government will even more urgently consider its methods and systems to control Hong Kong,” Mr. Tian said.

Trump visits US troops in Afghanistan on Thanksgiving