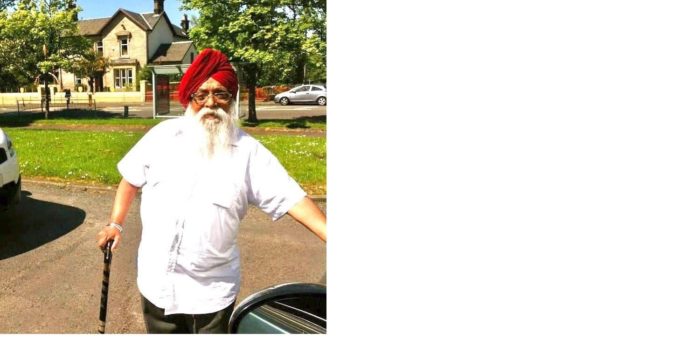 CHIMAN Singh Macha, who has died aged 89, was a leading figure in Glasgow’s Sikh community and a co-founder of the gurdwara in St Andrew’s Drive, Pollokshields. He performed many roles there and was a popular mentor and adviser to the community.

Friendly and approachable, he was known to many as simply “Charlie”.

He started his work as a volunteer at one of Glasgow’s first gurdwaras, on Nithsdale Road, on the South side, but as the Sikh community grew he came to play a central role in the establishment of the St Andrew’s Drive gurdwara.

Opened in the late 1960s, Shri Guru Tegh Bahadur Gurdwara runs religious programmes every day as well as cultural teaching and lessons on Sundays, and is one of the focal points for the Sikh community.

From its earliest days, Macha played an important and guiding role at the temple as secretary, vice-president and then president. More recently, as its eldest member, he was a senior advisor and continued to give his time voluntarily.

Not a day went past without his visiting the gurdwara.

Having lived in Glasgow for 70 years, Macha always saw it as his hometown and had great affection for it, but it was in Aberdeen that he actually started out his life in this country.

He was born in 1932 in Lahore, in what is now Pakistan, the second of three children to Mokham Singh Macha and his wife, Mata Durga Dai. In common with many others of his countrymen, he travelled to Scotland in the early 1950s, when he was 19, in search of work.

Having settled in Aberdeen, he began earning a living as a draper, selling clothes door to door. At first, he knew no English but found the people very welcoming. Always charming and smiling, the young salesman could win customers over, and he remained in contact with some of them for many years. He also discovered a love for the city’s famous delicacy: butteries.

He remained fond of his early days there. In later years he would tell his family how he put clothes in a suitcase, learned what he needed to know about the currency, and started knocking on doors to make a living.

For many years afterwards, he would make return trips to Aberdeen to meet the friends he made there.

By 1952, he had moved to Glasgow, where he met and married Sheila Kaur and continued his work as a draper. He quickly became a well-known figure in the Sikh community. Always smartly dressed, he was instantly recognisable.

His daily routine barely changed over the years: a new set of clean clothes; turban washed, set and tied; wristwatch, kara and ring put on, then morning prayers, followed by tea and toast or a bit of porridge before a trip to the gurdwara. He would often also pop in to the bookmakers’ in McCulloch Street, where he would meet his brothers and friends.

He was one of the very first Jathedars (leader or consultant) at the gurdwara in Nithsdale Road and later took great pride and passion in the roles he played at St Andrew’s Drive. His contributions to it, and to his religious community, was central to his life.

Even when he stepped down due to ill-health, he was awarded – by public demand – the role of senior adviser to the gurdwara committee. The role of adviser was one he relished.

One of his favourite sayings was “meh saroyan da sanja” or “I’ll be of support to everyone” – and it was appreciated by his friends, family and wider community.

He and his wife had three sons and nine daughters, and his wider family became very well-known in Glasgow. His nephew is Satty Singh, who founded the popular Mister Singh’s restaurant in the 1980s.

Macha’s grandson, Goldie Macha, said his grandfather always took pride in dedicating himself and his time to the gurdwara and serving the community. “He was the first one there for everyone,” he said. “A selfless man with honourable morals.”

His grandson also paid tribute to the young Macha’s hard work and commitment when he first moved to Scotland in the 1950s.

“He was a young man at the time on a mission, prepared to take risks in the search of a better lifestyle for himself and his family, like many others of his close brothers and sisters did at the time.”

Throughout it all, his gurdwara in Glasgow remained central to his life. It serves as a place for Sikhs and non-Sikhs to pray, learn Punjabi, get married, say goodbye to loved ones and celebrate Sikh history. It was, and remains, one of the focal points for the political, religious and social activities for Scottish Sikhs.

The development of the gurdwara was also a symbol of the growth of the Sikh community in Glasgow. In 2013, a new purpose-built gurdwara was opened in Albert Drive, Pollokshields. At its opening ceremony, volunteers prepared 10,000 chapatis, 3,000 samosas and 15,000 cups of tea for visitors from all over Scotland and as far afield as London and Birmingham.

Chiman Singh Macha is survived by his three sons, nine daughters, 54 grandchildren and 79 great-grandchildren. His wife died in 1997, his sister, Bi Ji Samitra Kaur, in 2009 and his brother, Waleti Singh Dilber, in 2015.