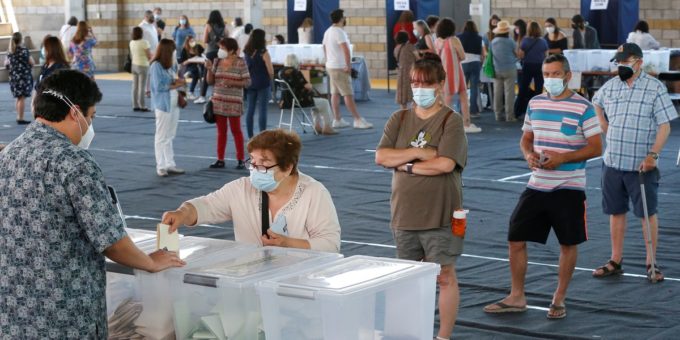 SANTIAGO, Nov 21 (Reuters) – Chileans began to vote on Sunday in what is widely seen as the nation’s most divisive presidential election since the country’s 1990 return to democracy, as an ultra-right-wing former congressman battles it out with a leftist who has thrown his support behind massive street protests.

On the Right, Jose Antonio Kast, a 55-year-old Catholic and father of nine, has promised to crack down on crime and has praised the neo-liberal “economic legacy” of former dictator Augusto Pinochet.

On the Left, lawmaker Gabriel Boric, 35, who led student protests in 2011 demanding improvements to Chile’s educational system, has pledged to scrap the nation’s laissez-faire economic model, while strengthening environmental protections and indigenous rights. Broadly speaking, he represents a significant rupture from the conservative to centrist policies that have dominated Chilean politics for decades.

“I’m voting for Boric because he’s young, because it’s good to give space to the new generations,” said Sandra Astorga, 55, a housewife in central Santiago.

The election comes after two years of dramatic, sometimes-violent street protests by Chileans demanding quality-of-life improvements. The demonstrations helped bring about an ongoing rewrite of the nation’s Pinochet-era constitution and propelled the candidacy of Boric, who for much of the race held a comfortable lead.

“My perception is that the principal demands (of the voters) are the same demands as those of the demonstrations,” said Gaspar Dominguez, a left-leaning delegate from the body re-writing Chile’s magna carta. “Rights that have to do with social rights, healthcare, education and housing.”

But increasing fatigue among Chileans fed up with political violence, combined a with a widespread perception that crime is on the rise, has boosted Kast.

Most polls have Kast winning the most votes on Sunday by a few percentage points, while a likely runoff in December would be extremely competitive.

“He’s going to defeat narco-trafficking, which is doing so much damage to our country,” Gloria Reyes Flores, a 66-year-old widower in the upscale Santiago district of Las Condes, said of the right-wing candidate. “He’s also going to control immigration because there are a lot of immigrants who are coming to do harm to Chile.”

One wild card will be the performance of the more moderate candidates in the race. Center-right Sebastian Sichel and center-left Yasna Provoste are both polling between 10% and 15%, at least 10 percentage points back from Kast and Boric. But pollsters say a surprise is still possible given that millions of voters remain undecided.

Barring any surprise, Kast and Boric will be scrambling to pick up Sichel and Provoste voters in the potential second round, scheduled for Dec. 19, making the more moderate contenders potential kingmakers.

If either of the two leading candidates manages to clear 2 million votes, said Kenneth Bunker, director of political consultancy Tresquintos, it could be a good indicator that they have broadened their base sufficiently to win in an eventual second round.

The polls opened at 8 a.m. (1100 GMT) and are scheduled to close at 6 p.m. Results are expected shortly thereafter.

Also up for grabs are all 155 seats in Chile’s lower house, 27 of the 50 seats in the country’s upper house and all positions in the nation’s 16 regional councils.