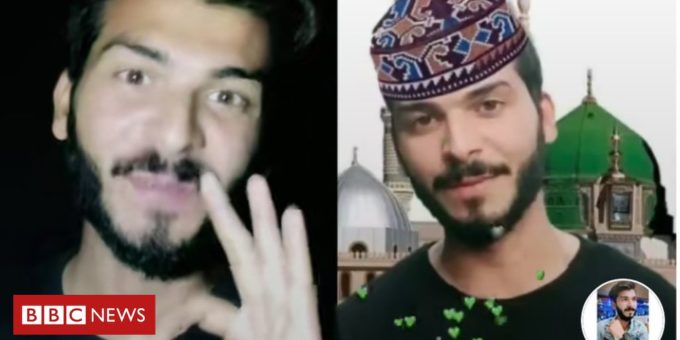 Ajay Barman, 22, is a fading TikTok star in India. Not because he is past his prime, but because – he alleges – he’s been “shadow banned” for uploading videos on Hindu-Muslim brotherhood on the popular video creation and sharing platform.

Shadow banning is the act of partially blocking content so it doesn’t reach the platform’s entire community of users. It will not be obvious to the user that the creator’s content is not being promoted.

TikTok has traditionally shied away from political subjects, but Mr Barman built a strong following of just under a million by performing and uploading 15 second skits on the theme of Hindu-Muslim unity at a time when many in India fear the two communities are being driven further apart. His most popular offering garnered more than 2.5 million views.

In one of the videos, Mr Barman is dressed as a Muslim man wearing a white prayer cap who is being carried by a Hindu man as harmonious music plays in the background. In another popular skit, he is dressed as a Muslim writer from Pakistan who is in India to research a book and is greeted and hosted by two gleeful Hindu strangers.

The fact that a young Hindu man from the Indian city of Bhopal was uploading videos promoting brotherhood and peace between Hindus and Muslims captured significant attention, earning him the moniker of top “humanity” content creator.

But over the past four months, TikTok India has been restricting the reach of his account to stay away from such “risky” content, he says, adding that he has lost some 25,000 followers since the end of October.

In particular, his videos were no longer suggested on the front page, where TikTok gives tailored recommendations of creators and hashtags for users to discover.

He says his account started losing prominence last year, around the time a backlash began against the Citizenship Amendment Act (CAA) – a controversial law which offers Indian citizenship to non-Muslims fleeing religious persecution in Pakistan, Bangladesh and Afghanistan.

The law sparked fears it would marginalise India’s Muslim minority, triggering protests. In the past few months, many of TikTok’s 200 million Indian users have posted skits and songs on the app to voice their own opposition.

Thousands of these profess “unity” between people of different faiths under an umbrella of hashtags around the CAA, and have gathered millions of views.

But many are now worried after Mr Barman alleged he was shadow-banned. They wonder if they may be next.

“I was inspired by many of Mr Barman’s videos that talk about brotherhood between Hindus and Muslims,” said Mirza Ateeque Baig, a 16-year-old user.

Mirza shot to fame with a video viewed more than 4.8 million times, positioning politicians as the culprits dividing communities amid the backdrop of the citizenship law protests.

He says he was “scared” to upload it at first. “I thought about it for 15 minutes. They [TikTok] don’t want anything political that will impact them.”

TikTok India said it does not restrict any political content unless it violates its community guidelines.

While the app does ban accounts for serious violations like pornography or hate speech, content it sees as a “lesser infringement” of its guidelines is left up on the app – but partially limited across user feeds.

This kind of “limiting” or shadow banning leaves creators in a bind – they are unsure if their content is being censored for violating guidelines, or whether it was simply not good enough to be promoted.

But then, users point to other evidence of people being blocked or “shadow banned” for political reasons by the app.

In the past few months the social media platform, owned by China’s ByteDance, has been called out for allegedly censoring so-called “risky” content. Most recently, it faced massive backlash in the US for blocking a teenager’s account after she uploaded a video accusing China of putting Muslims into “concentration camps”. TikTok later issued an apology and reinstated her account.

Meanwhile, a recent report in The Guardian revealed that Bytedance had policies in place that outright censored “politically sensitive” content relating to US President Donald Trump and criticism of China’s socialist system.

In Turkey, the company was found to be censoring content that showed the LGBT community or same-sex relationships in a positive light. It has since updated its policies.

However, TikTok has reason to be cautious in India. Police bought a case against unidentified TikTok influencers for hate speech over a video that sought revenge for a victim of mob lynching, and the app was temporarily banned in the country last year when a court decided it was encouraging pornography.

Tiktok told the BBC it had temporarily suspended Mr Barman’s account because he was seen wearing a t-shirt with a drug reference in several of his videos. “This should not have been a violation, and we have reinstated the videos accordingly,” the company added.

“Our guidelines are clear that political content is allowed on TikTok, as long as it does not include extremist content, such as hate speech,” a TikTok spokesperson said. “All users have the opportunity to appeal violations, which the user had not done in this case.”

The company, however, did not respond to Mr Barman’s allegation that he had been “shadow banned”.

For Mr Barman, the timing remains troubling. “Since the censoring, I have made most of my Hindu-Muslim humanity videos private, hoping that TikTok will reverse the shadow ban.” He has even abandoned his first account and started afresh, uploading only comedy content that steers clear of his usual themes.

Mr Barman’s fans, meanwhile, have started an online campaign to reinstate his account, using the hashtag “unfreeze”. They have made more than 700 videos.

Free speech activists have also raised questions over the practice of shadow banning content on TikTok.

“They will have to be transparent about to what extent and technical ability they are boosting, de-prioritising and changing the ecology of experience for users and creators on the app,” said Apar Gupta, executive director of the Internet Freedom Foundation.

He also pointed to the larger problem of censorship being algorithm-driven. In most cases, apps like TikTok tweak the platform in a way that matches their commercial interest over any interest in free expression, Mr Gupta added.

“We also now have a platform which has the communitarian ethos of China, which is risk averse to almost any kind of political commentary. TikTok doesn’t recognise that in the territories it operates, politics is an everyday conversation.”

Russia to evacuate citizens from China as virus toll rises

Bloomberg Proposes $5 Trillion in Taxes on the Rich and Corporations

Vidya Balan shows how to get sustainable fashion right with her online promotion looks!
2020-07-24