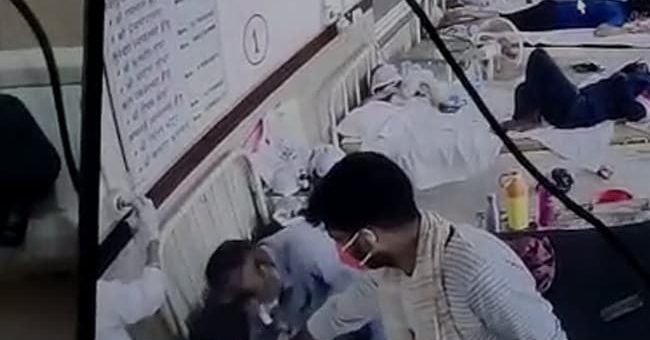 The patient’s family has cited a CCTV footage which has led to a probe in the incident.

More than a year after India’s fight against COVID-19 began, the virus is spreading faster than ever before and appalling stories of distress are being reported from across the country. In Madhya Pradesh, which is battling the second Covid wave like many other states, several shocking incidents have come to fore in the last few days.

In the latest incident, a CCTV footage recovered from a government hospital in Shivpuri, about 300 km from state capital Bhopal, has led to a probe into a coronavirus patient’s death as his family alleged the oxygen supply was stopped by the hospital staff. The hospital administration had earlier denied any lapses.

The Covid patient’s son said he was with his father till 11:30 PM on Tuesday. Hours after he left for home, he received a call from the hospital.

“He had been feeling better for the last two-three days. He was eating food, and things were getting better. But on Tuesday night, the staff removed his oxygen supply. I got a call in the morning. I rushed to the hospital and I requested the staff to give him oxygen. They refused. Then I took him to the ICU (intensive care unit) but he died within 15 minutes,” he recalled.

The CCTV clip, nearly one-minute long, shows the elderly main, visibly distressed. A young health worker – standing close to his bed – calls his colleagues, apparently for help. One of them is then seen pressing a button towards the end of the clip. No health worker is wearing a PPE kit, which is usually worn by frontline workers in Covid wards.

The hospital administration has constituted a three-member committee – headed by the HOD of Surgery Dr Anant Kumar Rakhode – to investigate the matter and submit a report in 48 hours.

Arjun Lal Sharma, Chief Medical Health Officer, told reporters, “As far as the district hospital is concerned, we have 76 oxygen beds, 30 beds in ICU and 13 oxygen concentrator machines. There is enough storage in reserve. The patient was also receiving dialysis treatment. His hemoglobin was also low. However, if anybody is found guilty, he will be punished.”

This morning, India recorded the biggest-ever single-day surge of over 2 lakh Covid cases. Madhya Pradesh reported the highest-ever single day spike of 9,720 new cases and 51 deaths in the last 24 hours.

The positivity rate in the state too surged from the previous day’s 19.3 per cent to 21.7 per cent.

Scenes of patients dying at hospital gates have been recorded from places like Indore, with such videos circulating on social media, in the last few days.

Earlier this week, a shocking video from a government hospital in Sanchi showed a gardener collecting Covid samples in a proof of staff shortage at hospitals.