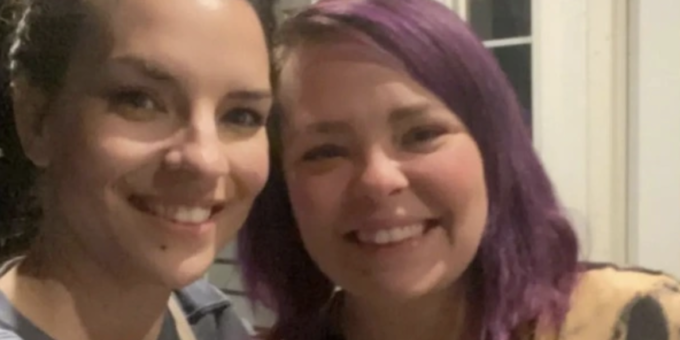 Catelynn Lowell has been in the spotlight for nearly half her life.

So longtime fans of the Teen Mom franchise might think they know just about everything there is to know about Cate.

That’s one reason that so many were shocked when Lowell posed for a photo of her sister Amber earlier this week.

Apparently, lots of folks didn’t even realize Cate had a sister!

Additionally, many were shocked by the appearance of this mystery sibling.

We know what you’re thinking — usually when social media users feel the need to comment on a strangers’ looks, it’s a very, very bad thing.

But in a refreshing change of pace, the remarks about Cate’s sister were 100 percent complimentary!

The photo above, which shows Catelynn smiling alongside her 31-year-old sis Amber — was posted by the girls’ father, David Lowell.

Appropriately, he captioned it merely, “Daughters.”

“The sister is very pretty. They both have a similar smile. This is so sweet,” one person commented on the pic, according to UK tabloid The Sun.

“Amber is so beautiful,” a third chimed in.

Yes, folks, what you’re witnessing here is a truly rare occurrence in 2022:

A person who previously made an effort to protect their privacy decided to let their guard down on social media, and they didn’t wind up regretting it (at least not yet)!

We doubt that Amber will start making regular appearances on Teen Mom: The Next Chapter, but her first experience as a public figure appears to have gone swimmingly!

As some fans pointed out, Cate’s husband Tyler Baltierra also has a sister named Amber, which is just one of the many ways in which the couple’s families are connected.

As you may recall, Catelynn’s mother, April, was married to Tyler’s father, Butch, for four years.

The couple separated in 2013, and sadly, Tyler’s dad has since fallen on hard times.

Back in June, Butch was arrested in Michigan on charges of charge of OUI (Operating Under the Influence).

Butch has battled addiction and legal troubles for several years, and Tyler has been quite open about his father’s difficulties.

In fact, both he and Catelynn have spoken candidly about their families, which is one reason that fans were so surprised to learn that Cate has a third sibling they were unaware of.

But hey — if Amber wanted her privacy then Catelynn deserves credit for helping her protect it all of these years.

It couldn’t have been easy!

Hardik Pandya Or Ben Stokes — Who Is The Better All-Rounder? Jacques Kallis Says This